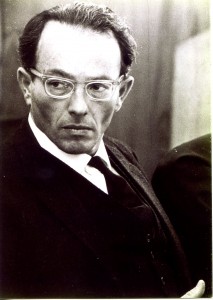 My father was a cold war warrior and a humanist. His was an academic mind, fired by a fierce individualism, abhorrence of communism (oppressive regimes in general) and love of personal liberty. “In his many interviews, seminars and books, he uncovered the true workings of communism,” wrote The Times in his obituary. He was also a crusader for European unity. The Guardian’s obituary began: “In a hypothetical post-communist state of Mitteleuropa there would have been one candidate for Prime Minister, Foreign Secretary and maybe President – George Urban.”

Once described as ‘arguably the English speaking world’s best interviewer’, he perfected the long form interview into dialogue that informed and enlightened.

He graduated from Budapest University in 1947 and obtained his PhD at London University in 1956 (in German poetry & language) – the year of the Hungarian Revolution, during which I escaped. In 1957, he published an account of the Revolution, The Nineteen Days (Heinemann, 360pp), based on researched accounts and news reports.

He drew extensively not only on eye witness accounts but also on extracts from Communist party press and radio and also from the insurgent radio broadcasts which were sent while the freedom fighters were in action, providing a sense of immediacy and a moving sense of the impending catastrophe as the 19 days came to an end and Hungary was once more under Communist control.

He served with the European Services of the BBC from 1948 to 1960, after which he was appointed Director of University Broadcasting at Radio Free Europe (RFE). From 1967 to 1970 he was Senior Research Associate at the University of Southern California, and founded the journal, Studies in Comparative Communism.

In 1968 Urban moved to Los Angeles as a senior research associate of the school of politics and international relations at the University of Southern California (1968-70). Here, with Roger Swearingen, he founded the journal Studies in Comparative Communism. He was also a visiting research fellow at Indiana University (1975) and a visiting fellow at Harvard University (1980).

Urban  returned to RFE as its Director from 1982 to 1986; at the same time he was involved with the Institute for European Defence and Strategic Studies. RFE was one of the few sources of reliable news and current affairs for East Europeans under communist oppression, its broadcasts often jammed (but also listened to) by authorities.

Urban was well known for his long interview-dialogues which he transcribed into articles for Encounter, which were also converted into a series of books including Can We Survive Our Future? (1972, with Michael Glenny), a symposium about the state of the planet, and Detente in 1976 (with Leo Labedz, Adam Ulam, Zbigniew Brzezinski, Francois Bondy, Richard Pipes, Dean Rusk); End of Empire: The Demise of the Soviet Union in 1992 (Sidney Hook, Hugh Trevor-Roper, Karl Popper, Otto von Habsburg, Elie Kedourie) and Stalinism (dialogues with 11 interviewees).

Sources: The Atlantic Semantic, The Times, The Guardian, The Bodley Head