When ridicule is best

I was reading about the dismissal (December 2012) of Richard Falk from the Santa Barbara Committee of the prestigious Human Rights Watch, after an open letter of complaint to HRW Executive Director Kenneth Roth (December 17, 2012) from UN Watch, a Geneva-based NGO monitoring the UN, about Falk’s various antisemitic remarks. Falk, however, remains the UN Special Rapporteur on “the situation of human rights in the Palestinian territories occupied since 1967.”

Let’s leave his inappropriate (to put it mildly) UN role for the moment, though, and look at one of the many irritants that outraged the Australia/Israel & Jewish Affairs Council: “In this blog post, dated January 11, 2011, Mr. Falk endorses the slurs of conspiracy theorists who allege that the September 11, 2001, terrorist attacks were perpetrated and then covered up by the U.S. government and media. Mr. Falk’s comments are despicable and deeply offensive, and I condemn them in the strongest terms,” writes Or Avi-Guy of the Australia/Israel & Jewish Affairs Council.

No, no and no! Outrage is the wrong response to Falk, as it is to the Holocaust deniers. Outrage means you are taking them seriously. How can you? How can anyone? When I hear or read stuff like “theSeptember 11, 2001, terrorist attacks were perpetrated and then covered up by theU.S.government and media” my first and last reaction is to guffaw loudly. The same as if I came across a statement from Ding Bat that claims the Earth is flat and that there is an airline conspiracy to pretend it’s round.

Would you be outraged at that? Surely not. You would ridicule it, unless of course it was revealed that Ding Bat was ill; mentally ill.

Or Avi-Guy adds: “In my view, Mr. Falk’s latest commentary is so noxious that it should finally be plain to all that he should no longer continue in his position on behalf of the UN. I would note thatU.S.and many other diplomats walked out in protest in September 2010 when Iranian President Ahmadinejad made similarly slanderous remarks before the UN General Assembly.”

That, too, was a huge mistake by those that walked out; they should have doubled up with the laughter of scorn and ridicule, pointing their fingers at Ahmadinejad, slapping their thighs. Taking those remarks seriously gives them a weird authority. 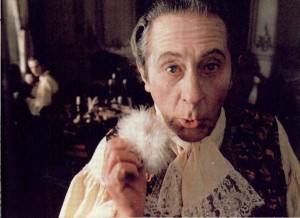 Outrage is not the only option; outrage elevates the (usually foolish, malevolent or plain stupid) offender, whereas ridicule deflates the attack and makes the attacker a laughing stock – much less fearsome than someone who can pull our strings and make us jump. Laughing at the likes of these denies them the encouragement to be repeat offenders; it’s the outraged reaction they are after. Let’s not encourage them. (Image: still from Ridicule (1996, dir: Patrice Leconte)

There is no shortage of the ridiculous; here is another report (AIJAC) that demands ridicule, not outrage: “Iranian state run media, PressTV, may have surpassed itself this time airing the outrageous views of Michael Harris who blamed Israel for a number of mass shootings in America, including the tragic shooting at Sandy Hook Elementary School that killed 26 people, including twenty children, two of whom were Jewish. Harris also blamed ‘Israeli death squads’ for other recent shootings, including theArizonashooting of Gabrielle Giffords, theAurora‘Batman’ shooting, and the Breveik massacre inNorway.”

Why bother even reporting such patently irrational rubbish?

Ridicule is a powerful tool in dealing with the likes of Ahmadinejad, the loony Kims of Korea or the pathetic and wacky holocaust deniers. No, they are not funny; they are ridiculous.