When President Barack Obama of the US and Prime Minister David Cameron of the UK stood shoulder to shoulder at the White House to announce a joint effort to turbo charge cyber security against Islamic terrorism (January 16, 2015), 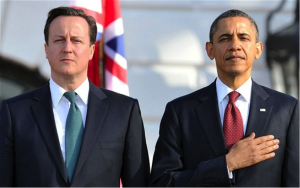 the most important party to the undertaking was absent. Missing. Not there. Invisible. A senior Muslim leader. 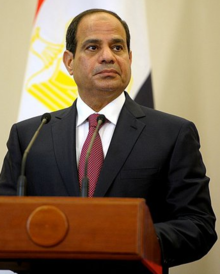 Say, President Abdel Fattah el-Sisi of Egypt, who just two weeks earlier (January 1, 2015) had called for nothing less than an internal revolution to drag Islam into the 21st century.

“That thinking—I am not saying “religion” but “thinking”—that corpus of texts and ideas that we have sacralized over the centuries, to the point that departing from them has become almost impossible, is antagonizing the entire world,” said el-Sisi.

“ … we are in need of a religious revolution. You, imams, are responsible before Allah.” – el-Sisi, speaking before Al-Azhar and the Awqaf Ministry, January 1, 2015

The leaders of Western, non-Islamic countries are often televised standing in front of their microphones declaring war on terrorists. Too easily the Islamic misfits can portray these as anti-Muslim acts and provocations. It would not be easy to do so if every time Western leaders spoke out against the massacres in the name of Islam, a senior figure from Islam stood – and spoke – with them.

This appalling lack of strategic and sensitive thinking underlines why the West is helpless in the face of fundamentalists. They paint us as the enemy, and have these pictures with which to do so. With Muslim voices calling for profound Islamic reform now increasingly heard – from those in authority like el-Sisi to authors like French Muslim philosopher Abdennour Bidar (Islam has given birth to monsters) – it is possible, nay, imperative – to build such a bridge between the secular West and the Islamic world. Such a bridge would enable tolerant Muslims and non-Muslims to work together in the open.

The task of de-radicalising and depoliticising their religion is, however, entirely in the hands of Muslims.