The cartoon that sunk Australia’s ship of fools

Australia’s cultural descent has accelerated. Only last year Barry Humphries was moved to remark that Australia had become a puritanical society. What a turn-around.

“We think we live in a liberated age but we don’t really . . . we wag our fingers at people, we disapprove of them . . . we’re living in an age of new puritanism,” he told Sharri Markson (The Australian, September 28, 2015).

Less than a year after that observation, The Australian published the by now famous cartoon by Bill Leak depicting an Aboriginal policeman holding a youngster by the scruff of the neck and telling his father to teach the boy about personal responsibility. The father, holding a can of beer, replies ‘Yeah, righto, what’s his name then…’ It is one of the most potent cartoons in memory, in a single frame of a cartoon pinpointing a problem that was in the news at the time about Aboriginal youths in custody. Parental neglect and worse, was (and is) a contributing factor. 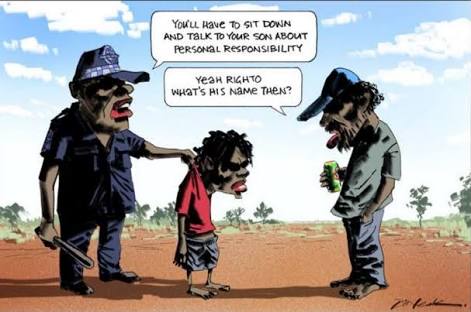 And the fools came rushing in to debunk him as racist. The word racist has obviously lost its real meaning now in political discourse. The cartoon is the exact opposite of racist. It illustrates a real problem in Aboriginal communities. It also shows that not all Aboriginal men behave miserably towards their children. The resulting row – it has not been a debate – demonstrates how far some Australians have strayed from reason and common sense in pursuit of a narrow politically and morally shallow agenda.

But the controversy was turbo charged when, on the public invitation of one of the Human Rights Commission’s own executives, Tim Soutphommasane, a woman (Melissa Dinnison) actually lodged a complaint about the cartoon, claiming – without any evidence – to have experienced racial hatred because of the cartoon.

Instead of rejecting the complaint on the grounds that it was frivolous, unsubstantiated and not worthy of the Commission’s resources, not to mention that the cartoon had no reference to the complainant, the foolish Commission treated it seriously. That was the moment that will go down in history as the moment that sunk Australia’s ship of fools. This was a cartoon, what’s more, which would be protected under s18D, the section immediately following s18C under which the complaint was made, and which is intended to exempt works of legitimate art, comment, etc. So the Commission stuffed up. In doing so, it opened the eyes of many in the community to the whole sorry saga of s18C’s throttling effect on freedom of expression. And common sense.

What the cartoon also achieved is to focus readers on the problem – not that anyone in politics seems able to address it and those who can have their hands tied by laws and red tape, bureaucratic inertia and lack of support.

Even as the Human Rights Commission was calling on Bill Leak to defend his cartoon – a profoundly worrying, anti-democratic, arrogant action – the High Court in Brisbane threw out a long running (why long running?) case against Queensland University of Technology students being sued for $250,000 by another Aboriginal woman, an employee at QUT. She had asked them to leave an otherwise empty computer lab that had been set aside for Aboriginal students. Yes, you read that right. They went on social media to ponder how segregation was being used to fight segregation? This was deemed so offensive the woman took ill and couldn’t work. That the matter took three years is abysmal.

And by the way, why is it necessary or advisable to have a segregated computer lab for Aboriginal students? Isn’t that disempowering them? Would the QUT open one for say the gay and lesbian students?

Bill Leak’s cartoon was published on August 4, 2016; it was three months later that he was asked to defend it.

The general public may be largely silent, but there is no doubt, judging by public feedback and commentary on newspaper websites, that it is uncomfortably so. The fools who perpetrate such damage to democracy, including the Prime Minister who has stated he doesn’t think freedom of expression is a priority, have misjudged that silent majority of Australians. The ship of fools is sinking.

FOOTNOTE 1:
The ship of fools is an allegory, originating from Book VI of Plato’s Republic, about a ship with a dysfunctional crew:
Imagine then a fleet or a ship in which there is a captain who is taller and stronger than any of the crew, but he is a little deaf and has a similar infirmity in sight, and his knowledge of navigation is not much better. The sailors are quarreling with one another about the steering––every one is of opinion that he has a right to steer, though he has never learned the art of navigation and cannot tell who taught him or when he learned, and will further assert that it cannot be taught, and they are ready to cut in pieces any one who says the contrary. They throng about the captain, begging and praying him to commit the helm to them; and if at any time they do not prevail, but others are preferred to them, they kill the others or throw them overboard …

November 12, 2016: The Australian Human Rights Commission says it has closed the file on Mr Leak’s August cartoon – which depicted a neglectful indigenous parent – after Perth woman Melissa Dinnison decided not to proceed.