Shortly after 10 am on Monday October 30, 2017, a slight young woman with blonde hair up in a bun and breathing nervously, took the witness stand in the packed Court 1 of Hobart’s Supreme Court. She was the first and the most dramatic witness to give evidence in three days of hearings before Justice Michael Brett, Tasmania’s then newest Supreme Court judge. Across the plaza of the court in Court 2, Justice Alan Blow was hearing a different matter, but the proximity was symbolic. Blow J, now the Chief Justice, was the trial judge at Neill-Fraser’s 2010 trial.

The 24 year old blonde was Meaghan Vass, who seven years earlier gave evidence at that trial to the effect that she had never set foot on the Four Winds, in contradiction of the evidence that her DNA had been found on the deck.

Vass was the first of several witnesses to be called by Tom Percy QC, the meticulous and steely Perth based barrister acting for Neill-Fraser. Behind him sat the urbane Paul Galbally, the instructing solicitor from Melbourne’s venerable firm of Galballys. Hoping to defeat the application to appeal was Tasmania’s new DPP, Daryl Coates SC.

Vass, a bundle of twitching nerves from the start, was asked to respond to the statutory declaration she signed in April 2017 which contradicts her earlier evidence. It states that she had been on board the Four Winds. Seated opposite the witness stand, ironically where the jury would normally sit, was Neill-Fraser, serene and unemotional, looking at Vass, who avoided eye contact throughout the almost two hours she was on the stand – which included a short break at her request to recover, having sobbed and screamed repeatedly that she remembered nothing about that day in January 2009. She pleaded “I can’t do this anymore, Damien” as she was led out (Damien is a policeman).

She claimed she had been intimidated into signing the stat dec by Karen Keefe, who had got to know Neill-Fraser in prison and was now trying to help her (Neill-Fraser). Vass claimed Keefe had said she would be put in the boot of a car if she didn’t sign… and nobody asked her any more information about that threat, such as ‘and then what?’ It was Karen Keefe who had made up the stat dec, Vass claimed as she jabbed violently at the document in front of her. But Vass also claimed she was offered money (possibly the $40,000 reward that had been publicly offered by the Neill-Fraser support group).

The homeless and long term unemployed Stephen Gleeson (visiting the court from his jail cell, thanks to an assault conviction) was another colourful witness. He lived in a yellow Ford near the Hobart rowing club who had helped Neill-Fraser and Bob Chappell with handling their dinghy on and off the beach from time to time, but had never been on board their yacht. Unlike another long time unemployed character, Paul Wroe, who, claimed Gleeson, had been invited on board, after which he gave Gleeson his character assessment of Chappell as “a condescending old cunt,” adding “I’d like to rip his gold tooth out with pliers,” – a wish that Wroe denied when he turned up two days later in the witness box. He also denied being a serial killer, another Gleeson claim, and for good measure told the court he was planning to sue Gleeson for defamation.

Gleeson admitted he would lie to help Neill-Fraser. Coates asked him why. “Because the police lied,” he replied.

These (and other) witnesses were called to establish that several other persons were in the area of the Four Winds on Australia Day 2009, as one of the grounds of appeal. Percy also foreshadowed to Justice Brett he would provide new scientific evidence, including the crucial report from Victorian Police forensics that contradicts the report by the Tasmanian forensics team about the Vass DNA. The latter, presented at the trial, dismissed the DNA as secondary transfer. Maxwell Jones from Melbourne explained to the court why it was more likely, highly likely, to be primary. It came from Vass. The sample was large and the indicators were strong.

After Coates made a sustained effort to undermine the DNA evidence as being “out of proportion” in the case, Percy took the opportunity to rise and tell the court about that extraordinary exchange during the trial between the trial judge and the two counsel:

MR ELLIS SC: … it was attributed to me that I said it was Mr Chappell’s blood in the dinghy. Now I don’t believe I did.

MR GUNSON SC: Yes, you did.

HIS HONOUR: In opening.

MR ELLIS SC: Oh okay, I abandon that, if I said it in opening.

HIS HONOUR: All right. Well I’ll do nothing about that point.

This caused a flurry and Judge Brett told counsel he would take submissions on it in chambers.

Grant Maddock, an artist but coming from a family of sailors, who lives on his yacht, provided evidence that perhaps explained eye witness evidence at trial in which local man John Hughes had claimed to have seen a female figure rowing out in a dinghy towards the Four Winds sometime before midnight. The slightly built Maddock (56 k at the time) had long hair in 2009, and his silhouette at night could easily be mistaken for female. Percy produced a telling 2009 photo of a long haired Maddock sitting in his dinghy. His evidence was also corroborated by veteran sailor John Brettingham-Moore, who was coming in towards the marina on his motor boat at that time and was offered assistance by Maddock in his dinghy. 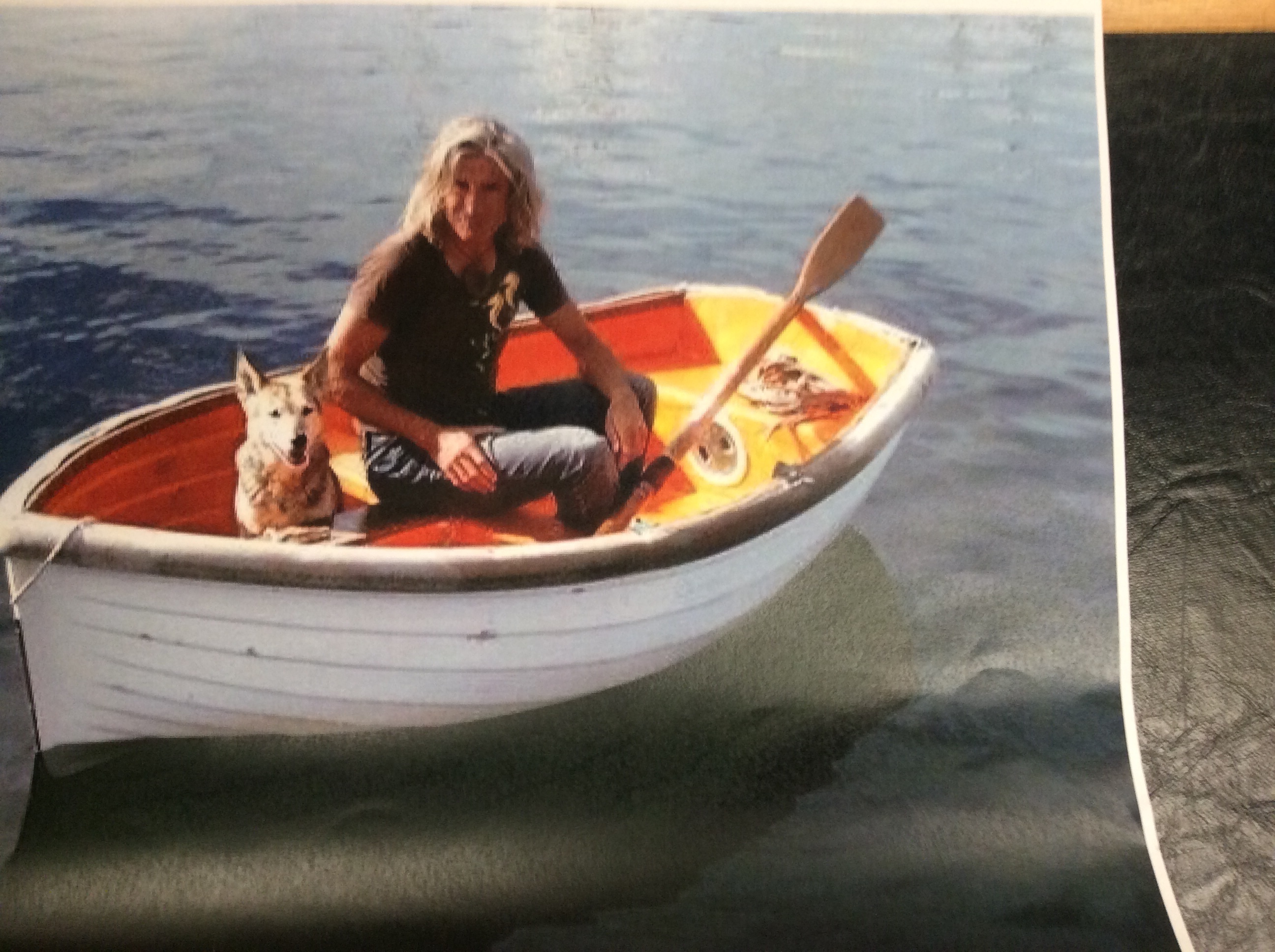 Christopher Smith, a shipwright, worked on the Four Winds after it was towed in on Australia Day 2009. The feed wire in the bilge pump control panel had been deliberately removed; the pumps, however had plenty of battery power. He showed it to one of the forensic officers working on the boat and suggested she take a photo, which she reluctantly did, but wondered why she should. This lack of curiosity surprised Smith, even though the matter was a missing person case, not yet a murder investigation.

Subsequently, he told the court, Smith bought the Four Winds. What the court didn’t hear was just how. The yacht, after being cleaned and repaired, was put up for auction. It was built in New Zealand, specially for Antarctic charter work, with a double skin steel hull and insulated cabin walls. It had cost $1 million to build but had last changed hands – when Neill-Fraser and Chappell bought it jointly in late 2008 – for just over $200,000. When Smith was asked to value the boat prior to it selling at auction, and having become very familiar with it, Smith went along to see how it sold. Perhaps its recent history, perhaps because it was expected to be expensive, he was the only one there. What would he offer? $50,000 he said. ‘Sold ! to the lone chap over there …’

Smith also told the court that the. DPP had visited the yacht a couple of weeks prior to the hearing, to make a winching exercise video. This was duly played to the court. After a couple of jerky false starts, the video showed Smith operating a winch, while a young man held onto a rope which was supposed to represent a body being winched up. It was a half baked idea badly executed (“worthless” according to Percy) and probably best described as helpful to Neill-Fraser as it showed just how hard it would have been for anyone let alone a middle aged woman with a bad back, to undertake the process as speculated by the prosecutor at trial.

It was also a fitting segue to the upcoming testimony of the final witness, a winching expert, who was unavoidably overseas.

The date for hearing testimony from that final witness and oral submissions by counsel was set down from March 7 to 9, 2018, the first available date for the court, the judge, the lawyers and the witness.

AN INCONVENIENT WOMAN
The universe was obviously watching because the rescheduling of these hearings from July brought them to coincide with the two week season of the new play about the case, An Inconvenient Woman, produced by the Tasmanian Theatre Company. Financed by Canberra lawyer Mark Blumer and written by playwright Brian Peddie the play is essentially edited extracts of the trial transcript and makes no comment that would be in contempt of court during the proceedings. But it says plenty through the facts.

Presented as a pop up theatre in an old waterside shed in Evans Street, the play is anything but dry and inaccessible. Making the most of the length of the space, the production uses sparse but highly effective staging, lighting and music. Excellent performances and a tight script bring out the absurdity of the prosecution case – simply by stating it.

Sue Neill-Fraser is portrayed as someone caught up in events over which she has no control, and in which she is a rather helpless figure tossed on the waves of a rough sea of justice. After the cast take their bows, they retreat to form a line at the rear of the performance space and each member places a hat on their head – a pointy witches hat.

The production played to full houses throughout its season; most of those attending the court also attended the theatre. Both were dramatic.

MEMORY AND JUSTICE
Peddie’s play highlights the vital role of memory in the execution of the law. Neill-Fraser’s memory let her down and lead her down the path to conviction. At one stage she tells the court, “I didn’t think it was important,” (to remember), summing up in a nutshell one of the most critical issues in the administration of justice. Courts and juries expect witnesses and the accused to recall with precision their actions in the past, which have become important now, in the wake of the event. Where did you park your car on June 5 last year may be important now, but on June 5 last year it may not have been at all memorable.

This reliance on the most fallible of human functions in such potentially life altering circumstances is a matter of considerable importance.