There is now a new and genuine, deeply troubling ‘climate emergency’; our children feel at risk of death by global warming. Bushfires, drought, hurricanes, storms and a world-ending catastrophe are rushing towards us. Their ‘home made’ street march placards say so. Schoolchildren who know nothing about climate and have been taught nothing but the falsehoods and misinformation from the activists’ playbook, have been not only indoctrinated but so terrified they are turning on their parents and the government, demanding we all ‘do something’. They harbour genuine fears for their future.  They will die, along with all life on our planet, in 12 years. Or is it 10? Or what?

As we all know, children take such information from their teachers deadly seriously, absolutely literally; they have not yet developed the filtering and balancing mechanisms that we acquire with maturity. And of course they receive no information from those derided as climate sceptics.

This shocking and shameful scare campaign on children has been ignored by the leaders of both parties. They have said nothing to reassure the children or to stop the activists doing it. The irresponsibility of doing nothing is shattering. It’s an urgent and essential part of leadership to protect children from harm – and from the unfounded fear of serious harm. 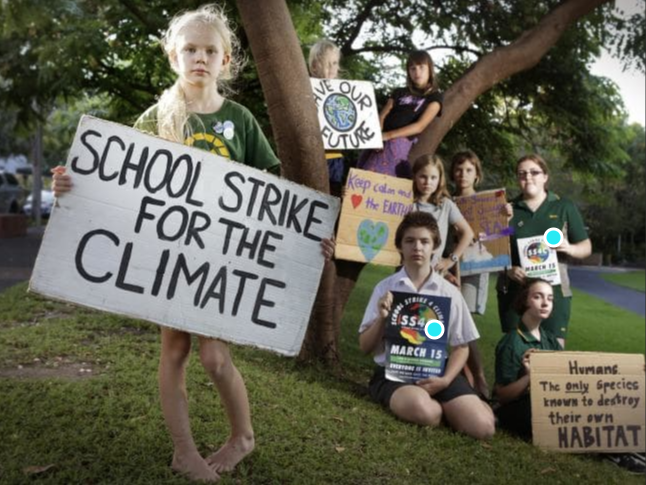 The reason that political class has been silent is their complicity in the unproven claims of warmists. The sad truth is that man made global warming is not a scientific issue in the public square: it is a political issue. Very few politicians (I can think of only two) are prepared to tell the genuine scientific truth about the subject, simply summed up by eminent Australian geologist Ian Plimer in these terms: “Annual human emissions (3% of the total) of carbon dioxide are meant to drive global warming. This has never been shown. If it could be shown, then it would also have to be shown that natural emissions (97%) don’t drive global warming.” (Deputy Labour Leader Tanya Plibersek has recently claimed on radio that she doesn’t know the % of C02 in our atmosphere.)

Having invested in the political necessity (or the sheep effect) of bowing to the ruling orthodoxy, our leadership has been locked into the fallacy that burning coal increases atmospheric C02 which in turn heats the planet. Having been interested in this subject for over five years, I can confirm that the internet offers endless and relevant scientific reports that will disabuse you of that notion. If I can learn how scientists are uncertain about the drivers of climate and warming, then heavens to betsy the armies of bureaucrats we employ to advise ministers could learn that too – even without calling for appropriate scientific testimony, as the US Senate has done.

“The IPCC produces reports that support the United Nations Framework Convention on Climate Change (UNFCCC), which is the main international treaty on climate change. The ultimate objective of the UNFCCC is to “stabilize greenhouse gas concentrations in the atmosphere at a level that would prevent dangerous anthropogenic [i.e., human-induced] interference with the climate system”.

So it is evident that ‘greenhouse gas concentrations’ were pre-emptively assumed to be ‘dangerous’ to our climate. Warming and human activity were thus stapled together both in the scientific formulation and in the broader socio-political sense. This approach has doomed scientific study to be hobbled by a presumptive approach that defies genuine science, curtails robust research and leads to disastrous public policies.

Judging by policies such as the catastrophic renewable energy obsession, the uncertainty of many climate scientists has not alerted politicians. “Understanding uncertainty associated with the complex, nonlinear and chaotic climate system, let alone managing it, is a very challenging endeavour.  Hence it is tempting for scientists and policy makers to simplify uncertainty to make it appear that the appropriate considerations have been undertaken,” says acclaimed and credible climate scientist Dr Judith Curry. (One who gave testimony to the US Senate. )

While it is disastrous for policy making, the wilful ignorance of the political class now has to face the even more pressing responsibility of keeping the children of this nation safe from the psychological harm and emotional disturbance being perpetrated by the amoral activists who manipulate children, grooming them into the cult. It’s perilously close to child abuse.

If those seen by children as the responsible leaders of our country fail to counter this despicable attempt to manipulate children, they will have failed one of their most important responsibilities. Silence is complicity. A multi-party statement promoted widely and targeted at schools would help; it should at least contain some basic indisputable facts:

As you know, carbon dioxide is the food of plants. It greens the planet. Increases in atmospheric CO2 over 33 years (to 2016) has meant increases in the planet’s greenery by 18 million square miles – about twice the size of Australia, a Chinese University study has found. Help spread this good news, to counter all that alarming stuff about climate change.

Human emissions of CO2 make up just 3% of the total CO2 in the atmosphere, and Australia’s contribution is about 1.3% of the 3%.

Don’t be alarmed, children, some naughty people exaggerate the threat of climate change to scare you to urge governments into decisions they would prefer.

If climate change activists really care for our future, they better start discovering the facts for themselves and leave the kids alone. And if our leaders really care about children, they better take a promise to safeguard them from this nasty indoctrination into the election. Information is power. Empower the children.