In a letter dated December 30, 2021, obtained and published exclusively on The Epoch Times on April 13, 2022, a ’ Jan. 6 prisoner’ tells his disturbing story. If we didn’t know this was in America, we’d think it was in a third world dictatorship. But Jeremy Brown is a combat veteran, having fought under his country’s flag. His experience warns us that when the apparatus of the State goes rogue, with the connivance of the political leadership, that third world dictatorship has landed. 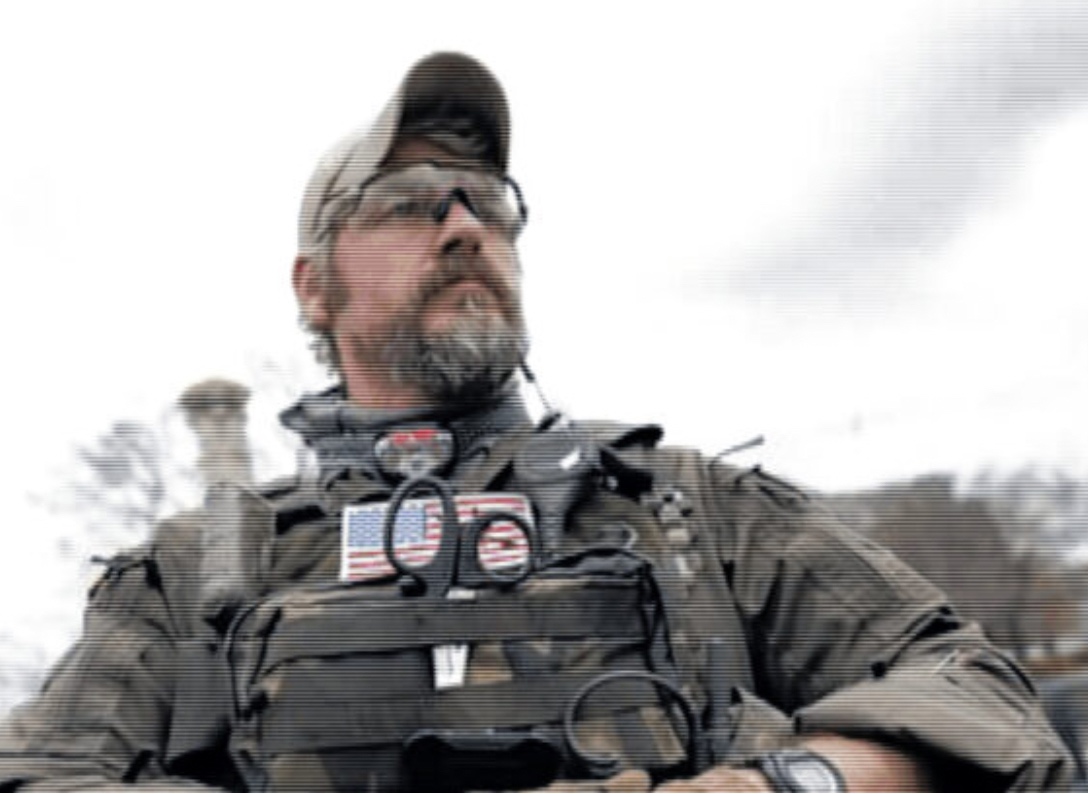 Jeremy Brown dressed in tactical gear at the U.S. Capitol on Jan. 6, 2021. Brown provided security at the Stop the Steal Rally.

“My name is Jeremy Brown,” the letter begins. “I am a 20-year retired U.S. Army Special Forces Combat Veteran. On January 5th and 6th, 2021 I was in our Nation’s capital as part of an all-volunteer protective detail tasked with providing security for organizers and speakers at a legally permitted political rally.

On September 30th, 2021 I was arrested at home in Tampa, Florida by approximately 30 to 40 heavily armed Federal Agents and local law enforcement. They came in full force to serve a misdemeanor arrest warrant for being in an ‘unauthorized area.’ These were no ordinary agents. They were agents working as part of the FBI’s Joint Terrorism Task Force (JTTF). Oddly, in the nine months prior to that day, I had never been contacted or questioned by any investigators about this case. Stranger still, the arrest warrant and search warrant had only been granted one day prior. This, despite numerous members of my Protective Detail having been arrested many months prior. While this may sound unusual to you, I know exactly why it happened.”

According to Brown, the same JTTF agents who arrested him on Sept. 30, 2021, had tried to recruit him as a Confidential Informant (CI) on Dec. 9, 2020. Their “pitch,” he said, was intended to gauge his “willingness to infiltrate law-abiding citizen groups that had no criminal history and certainly were not designated “terrorist groups.”

Brown declined their offer. But, having what he calls “a healthy mistrust of Federal law enforcement,” Brown made an audio recording of the exchange, which—after many efforts to delete it from the internet—has been shared and reposted by numerous others, keeping it alive. The most current iteration was shared by The Gateway Pundit.

On Jan. 6, as Brown stood next to the stage waiting for President Donald Trump to address the crowd, he described how he was again contacted by phone by one of the same JTTF agents. Brown explained to the agent where he was and what he was doing. “So, on January 6th, 2021,” he wrote in his letter, “they were well aware of my location and reason for being there.”

On Jan. 7, Brown said he sent a video of unarmed female Air Force Veteran, Ashli Babbitt, being shot by a Capitol Police Officer Lt. Michael Byrd in a text message, saying, “here is a contact report for you!” The agent acknowledged watching the video with a “Wow…” That was the last direct communication Brown had with that agent or the JTTF until he was arrested on Sept. 30, 2021.

“In the days and weeks that followed the events of January 6th, I was disgusted and appalled at the blatant lies that were coming from the media, politicians, and the Department of Justice,” Brown wrote further in his letter. “In particular, it was FBI Director Christopher Wray’s testimony (pdf) on the House floor that made me realize I had to go public with what I knew.”

That was when Brown contacted podcast host Brandon Gray who conducted the two-hour interview where he exposed the recording of the JTTF’s recruitment effort and provided his professional assessment. “I knew I was making myself an FBI target, but I had sworn an oath to the U.S. Constitution so the choice to speak out was an easy one,” Brown wrote.

Brown cites the June 8, 2021, investigative article by Darren Beattie of Revolver.news that exposed evidence of the FBI’s potential involvement in staging the events of Jan. 6. The article also uncovered how the Michigan governor kidnapping plot seemed to be a dress rehearsal for the FBI for Jan. 6. While trying to blame a pro-constitutional group the FBI labeled as “Far-Right Militia,” Brown noted how most of the “players” in the plot “turned out to be FBI informants or actual agents. Ooopsie!”

Knowing how correspondence is monitored and often censored by authorities, Brown’s girlfriend, who spoke to The Epoch Times under the condition of anonymity for fear of being harassed, said she is surprised his letter managed to slip through their scrutiny unscathed.

“That came through the mail, “she explained, noting how the focus of prison officials monitoring emails and phone calls may have enabled his letter to slip through. “He wrote that in jail and was allowed to mail it out. Everything they bring up in court is about phone calls.”

For her, the repeated visits by the FBI, Joint Terrorist Task Force, the ATF, and Homeland Security have been done for no other reason than to intimidate her and cause fear. “It is the biggest violation of every single privacy I have ever had,” she said. “They have been to my house. They searched our house for five and a half hours initially. Then they came back and did another search. They took samples of carpet. They took dog hair. They subpoenaed all of my bank accounts and accessed the trust I have set up for Jeremy. I have absolutely no privacy. They know everything about me and I’m not the one being charged. I’ve done nothing but they have infiltrated every aspect of my life. In the last two weeks, I have had two black SUVs with heavily tinted windows just sitting at the end of my street. My neighbor knocked on the window and asked them to roll it down. They wouldn’t.”

She noted how Brown had previously written another letter and sent it to The Epoch Times. According to the Jan. 14 report, Brown wrote: “On Dec. 11, 2020, the exact same Joint Terrorism Task Force (JTTF) agents that (later) arrested me attempted to recruit me as a confidential informant,” and told The Epoch Times he believes his arrest and prosecution are payback for his refusal to become a confidential informant.

She added that, while Brown has been arraigned, he has not been to trial or formally charged with anything. “He’s in limbo,” she said. “No hearing dates have been set. We are still in appeal for the bail and there’s motion to suppress the original search warrant.”

In the meantime, Brown remains a prisoner of his own country: “As I write this account on December 30, 2021, I mark my 92nd day of being held in the maximum security section of the Pinellas County Jail as an FBI whistleblower and Political Prisoner. To date, these are the crimes the FBI and Department of Justice are guilty of committing under Title 18 U.S. Code, Section 242, Deprivation of Rights under Color of Law:

All illegal acts by the FBI and DOJ are meant to silence me and keep me from exposing their lies and corruption. Their fake charges and overzealous arrest were meant to intimidate not only me but also the American people. They think that this illegal imprisonment will break my will and allow them to coerce me into pleading to a crime I did not commit or that will bolster their false narrative of Jan. 6. But, how did we get here?

In a 29-page opinion issued March 7, U.S. District Court Judge Carl Nichols dismissed charges against Jan. 6 prisoner Garret Miller, saying defendants can only be charged with obstruction if they directly attempted to affect “a document, record, or other object” in order to obstruct the ability of Congress to certify the election. Prosecutors had not even alleged that he had done so.

On April 6, U.S. District Judge Trevor McFadden acquitted Jan. 6 prisoner Matthew Martin of all four counts for which he was charged, saying it was reasonable for Martin to believe that police officers invited him and others to enter the Capitol through the Rotunda doors on Jan. 6, 2021. The judge also said Martin’s actions were “about as minimal and non-serious” as anyone who was at the Capitol that day.

“As I sit here in my jail cell being denied justice and my Constitutionally-protected, God-given rights, I wonder, Is anyone irate or tireless enough to save our Republic? … Will our children and our children’s children wonder what it was like to be free?

If you’re reading this, are you irate? Tireless? Are you willing to risk it all to set brushfires of Liberty in the souls of men? Are you willing to risk everything? Or, will we just wait for some other ‘good men’ to come along and do that ‘something?’ The time to look in the mirror and answer that question is NOW! Trust me, the time to fight is NOT after the tyrant locks you in a jail cell. 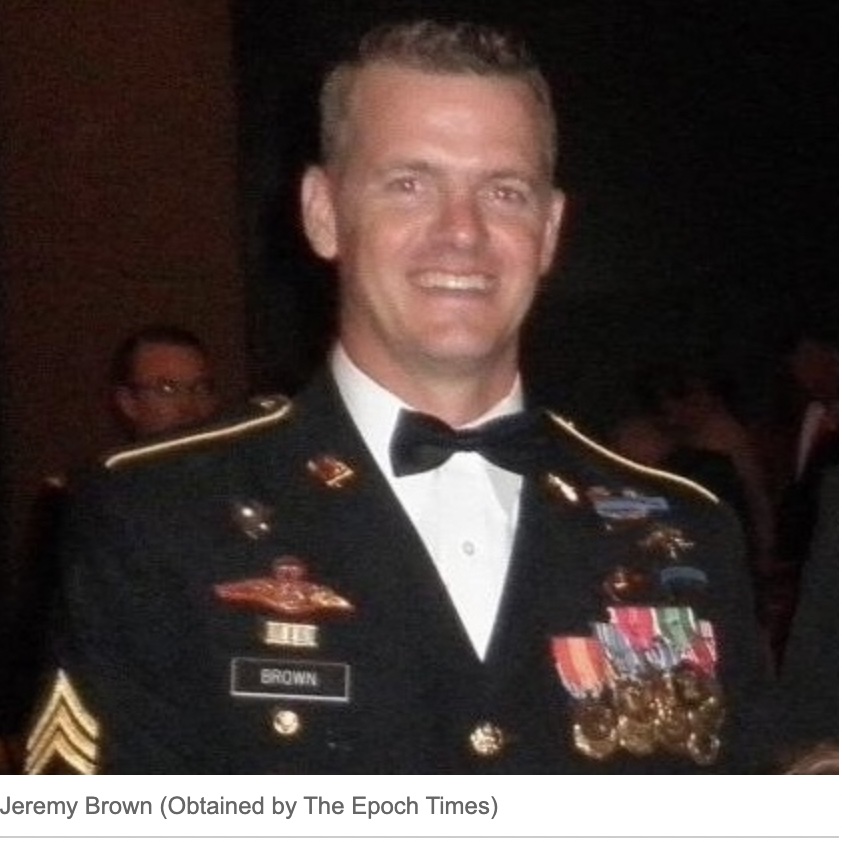 My name is Jeremy Brown and I am a January 6th Political Prisoner being held in the very country I spent my entire adult life defending at the highest level I could achieve. As a Green Beret I am trained and prepared for this and as an American I was born for this. I will fight until my dying breath before I surrender one letter of my Liberty. I am only one man, but if I’m the only man, so be it! I know there are millions like me and so I ask you, are you ready to light brushfires of Liberty in the souls of men? Then don’t do nothing!”