From dictatorship to democracy – weapons of non-violent revolution

Nobel Peace Prize nominee Gene Sharp has listed 198 ‘weapons’ that can be used in non-violent revolutions. And he’s adamant that they should indeed be considered weapons and that non-violent revolution is not for sissies. Nor for lazy wishful thinkers. To fight dictators with guns is to use their best weapons, not yours. Dictatorships are more frightened of ideas than they are of guns.

Gene Sharp is the founder of the Albert Einstein Institution and known for his extensive writings on nonviolent struggle, which have influenced numerous anti-government resistance movements around the world.

Sharp was born in North Baltimore, Ohio, (January 21, 1928)  the son of an itinerant Protestant minister. He received a Bachelor of Arts in Social Sciences in 1949 from Ohio State University, where he also received his Master of Arts in Sociology in 1951.

In 1953-54, Sharp was jailed for nine months after protesting the conscription of soldiers for the Korean War

In 1968, he got his PhD in political theory from Oxford University. Sharp has been a professor of political science at the University of Massachusetts Dartmouth since 1972. He simultaneously held research appointments at Harvard University’s Center for International Affairs since 1965.

In 1983 he founded the Albert Einstein Institution, a non-profit organization devoted to studies and the promotion of the use of nonviolent action in conflicts worldwide. In 2009 and 2012 he was nominated for the Nobel Peace Prize.

“Sharp’s key theme is that power is not monolithic; that is, it does not derive from some intrinsic quality of those who are in power. For Sharp, political power, the power of any state – regardless of its particular structural organization – ultimately derives from the subjects of the state. His fundamental belief is that any power structure relies upon the subjects’ obedience to the orders of the ruler. If subjects do not obey, leaders have no power.”

Ruaridh Arrow’s 85 minute, multi award winning documentary, How To Start a Revolution (2011), is the basis for a rich and extensive app for iPad, produced by Australia’s innovative The Project Factory, led by Guy Gadney and Jennifer Wilson. 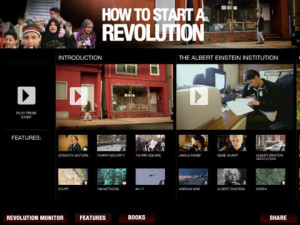 The app includes the original doco, plus bios, maps, features, and an interactive revolution monitor that fuses Google Earth with curated Twitter streams from more than 40 countries. Viewers simply touch a country to follow revolutions in real time and can interact with activists involved. Tweeted articles, blogs and video are displayed instantly creating a live stream of activist generated news by location.

Arrow trained as a newspaper journalist in Scotland winning the Guardian British Student Reporter of the Year award in 2004. In 2005 he was one of the youngest producers at Sky News in London before being asked to produce investigative programme Dispatches on Channel 4, the British equivalent of Frontline. He went on to work for BBC News, National Geographic and The Financial Times. In 2008 he was asked to carry out a number of consultancy projects advising Afghan satellite news channels broadcasting from Kabul. In 2009 he began work on How to Start a Revolution which was funded by raising almost $60,000 in three weeks on Kickstarter. While completing the film in Egypt he reported for the BBC from Tahrir Square, Cairo during the Egyptian Revolution. In 2012 Ruaridh won the Scottish BAFTA for New Talent.

Many of the weapons of non-violent revolution are simple but powerful, ranging from the use of flags and colours to social and economic non-cooperation, drama & music, mock funerals and silence, among the 198 listed on the app. These were first published in Sharp’s seminal book, The Politics of Nonviolent Action, Porter Sargent 1973.

But knowing these weapons is not in itself enough, says Sharp. “Wise strategy, attention to the dynamics of nonviolent struggle and careful selection of methods can increase a group’s chances of success.”

In a world awash with violence – and to what end? – Gene Sharp’s handbook and advice to beat brawns with brains is a political armoury more threatening to dictators than heavy weapons.