The takeout on Putin is that his increasing belligerence is fuelling ridicule. By Andrew L. Urban.

MUNICH — It was at the venerable Munich Security Conference in 2007 that Vladimir Putin first sounded the resentful Cold War blast that now defines his foreign policy, bitterly accusing the United States of seeking a monopoly on global power. Subsequent Munich conferences were marked by desultory efforts to “reset” the relationship, to maintain the appearance at least of collegiality. All that was before Ukraine. (New York Times, Feb. 9, 2015, Serge Schmemann)

This single paragraph exposes the blatant hypocrisy of Vladimir Putin, the foolishness of his world view – and the incompetence of the world at large to deal with Putin and Putinesque leaders of state. 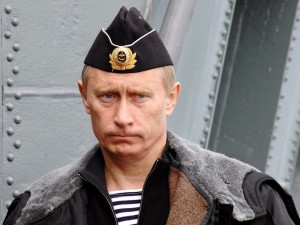 Second, Putin’s declaration is a recognition, albeit unintended, that he sees the world in terms of military & economic power; he respects power and he doesn’t want to respect the US. This is really outdated thinking, Cold War stuff. The world is a much more interconnected place, the Cold War battle of ideologies has been won. Communism lost.

Third, his belligerent statement underlines the fact that – despite the many critics of US foreign policy – there is no alternative power to curb Putinesque leaders with an army under their command. The UN is about as useful as an ashtray on a motorbike: it’s there, but it’s useless (at least as a policeman). The UN is the supposed guardian of the ‘world’ but has been castrated by the scalpel of inclusiveness, with rogue states having as much say and sway as decent ones.

Fourth, Putin is driven to frame his appearances on the world stage in terms of ‘poor Russia, the US is bullying us’ to keep his image of the defender of Russia alive. Unable to govern his country for the benefit of his people, ruling over standards of living well below those of the US, he must paint the US as the devil.

But he can no longer expect to be believed. He is now being ridiculed – the death knell of politicians.“The familiar litany of self-pity and it’s-all-Washington’s-doing from Russia’s foreign minister, Sergey Lavrov — once a friend to many in the hall — drew bursts of derisive laughter,” reports the New York Times.