Parisites in our midst

Last month (April, 2018) it was two years since world leaders converged with self congratulatory ceremony and chilled champagne to sign the multi billion dollar Paris agreement on climate change. Next month (June) it will be a year since our Chief Scientist, Alan Finkel AO, admitted the brutish truth that, in effect, Australia expensively accommodating that agreement is pointless. Hello, Canberra?

Finkel was asked in June 2017, what difference would it make to the climate if Australia, with its carbon dioxide emissions less than 1.5% of the global total, somehow managed to stop emitting 100 per cent of its carbon dioxide.

He had just delivered his panel’s Independent Review into the Future Security of the National Electricity Market. It had the word Independent glued in front of it as if to stick its tongue out to those who would mis-think of it as a report that toed any particular climate line. Except in its vision for the future, it lists four key outcomes, one being ‘lower emissions’. In other words, the five authors (of whom Finkel is one) believe that emissions are too high (presumably of carbon dioxide, not cow flatulence) and contribute to global warming.

Make of that scientific contradiction what you will – and Finkel cannot be accused of being a dreaded ‘denier’- but his view aligns with those who have been saying for a long time that our energy policies are hoodwinking the nation. Australia is an ongoing feast for the Parisites; these are the Paris agreement revering organisms that live off or within our national organism, obtaining nourishment and protection while offering no benefit in return.

Ideological Parisites:
The well fed campus Parisite (Parisite Academus) claims the high moral authority to lecture their students and gullible commoners about global warming and climate change in the certainty that man’s evil, selfish consumption of fossil fuels is scorching the earth, whipping up hurricanes and hastening us to Hades. There is no rational argument that can be had with this strain of Parisite, whose strenuous affirmation of climate change orthodoxy is a badge of virtue and righteousness to be protected with force if necessary. Their income is either directly or indirectly dependent on maintaining this position. Their campus minions can become thuggish …

The equally and obstinately misinformed public species (Parisite Plebeian) occupies positions in the bureaucracy and business where security of career requires total surrender to the ruling orthodoxy. They admire Al Gore. They are not curious. They are not sceptical. They are not well read on the subject. They confuse carbon with carbon dioxide. (They have an excuse; Finkel as a scientist, doesn’t. He is taken to task for it by Dr. Michael Crawford: “The word ‘clean’ occurs about 50 times in your report, particularly in conjunction with what you label a ‘Clean Energy Target’. It clearly implies that the alternative, in particular our fossil-fuel based legacy system … is dirty and thus ought to be replaced … you must be aware that the main emissions from fossil-fuel generators are water vapour and carbon dioxide (CO2) and not the element carbon in molecular or particulate form… (carbon dioxide) does nothing that fits with what people normally understand as “unclean” or “pollution”.)

Political Parisites:
Easily the most pernicious of Parisites (Parisite Pox), the political strain is a mongrel of ignorance and incompetence, a genetic disaster. Such a Parisite is slave to groupthink pressure, feigns principles but shuns evidence based policy formulation, supports government largesse that appeals to Parasites Plebeian and Academus, lacks courage and fails the nation. 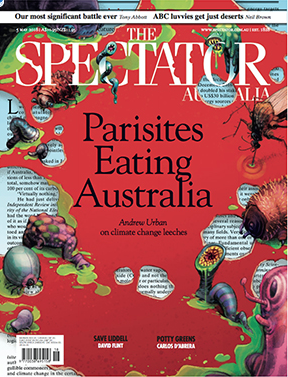 The most rabid and ego-fanning Parisite Pox (other than the Greens) resides within some State and local council bureaucracies, where they impose their will declaring renewable energy targets by post code, in defiance of the national plan. States that want to achieve the highest form of green purity opt for the highest levels of renewable targets. Imagine the benefit to our planet if only their State would aim to generate 50% or more of their energy needs with renewables. The renewables industry saw them coming. See below.

Financial Parisites:
Siemens is producing some US$200 billion worth of offshore wind turbines over the decade. Wealth Daily reported in December 2016 that Warren Buffett has doubled his stake in renewable energy, to US$30 billion. Australian renewable energy sources such as wind and solar will receive subsidies of up to $2.8 billion a year up to 2030.

‘Renewables’ is code for ‘jackpot’.

The financial Parisites make up a wide range of sub-species in the Parisite Gimme group, ranging from large businesses in or around the many (renewable dollar) opportunities to home owners with solar panels subsidised by their neighbours.

Sadly, there is another, persistent and invasive Parisite Gimme sub-species and it gives me no pleasure to include it here. It is the vast army (army as in under orders and unified, saluting, marching, etc) of scientists and their assistants who toil at the coalface (as it were) of climate related sciences. I refer only to those who cling to the ruling orthodoxy about climate change, not the many who “disagree about the causes and consequences of climate for several reasons. Climate is an interdisciplinary subject requiring insights from many fields. Very few scholars have mastery of more than one or two of these disciplines. Fundamental uncertainties arise from insufficient observational evidence, disagreements over how to interpret data, and how to set the parameters of models,” as the authors of Why Scientists Disagree About Global Warming put it. (Craig Idso, Robert M. Carter (1942-2016), S. Fred Singer – November, 2015)

As these scientists also point out, “climate scientists, like all humans, can be biased. Origins of bias include careerism, grant-seeking, political views, and confirmation bias.”

In my research I have not been able to discover grants, funding or subsidies enjoyed by scientists or scientific organisations tasked with finding the natural causes of climate variability. That research seems to be carried out in a self funded environment, free of Parisites.

This article also published as the cover story of Spectator Australia, May 5, 2018 (Illustration source)