It’s not over yet, but I feel this is a crucial moment in the evolution of the story about the shocking death of Saudi journalist Jamal Khashoggi. Let’s take stock of what we know – and ask some questions the world is keen to have answered.

But first, let’s dismiss the suspicion that the death is the work of the Saudi intelligence service; that would redefine the meaning of ‘intelligence’ as ‘stupid’. Not only would it be stupid to butcher a Saudi citizen in Turkey, it would be doubly stupid to think nobody would notice, or that you wouldn’t need a solid cover story for his disappearance immediately – no matter what. Then there is the two week delay in coming up with an ill fitting scenario; if he had indeed died accidentally in a fist fight, why would the Turkish and Saudi Governments not immediately issue a statement deploring it. And also produce the body for examination. That would be immediately followed by the normal processes of law enforcement to charge those responsible with either mansalughter or worse.

It was some 17 days after Khashoggi (below) failed to emerge from the Saudi consulate in Istanbul (where he was visiting to collect divorce papers), the Saudis announced he had died in an interrogation that went wrong.

This announcement came in the wake of initial denials of any knowledge of Khashoggi’s whereabouts. Below is a timeline, compiled by CBC: 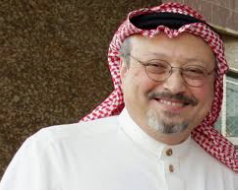 Oct. 2: Khashoggi went to the consulate in Istanbul to try to get papers required to marry his Turkish fiancée, Hatice Cengiz. She watched him enter and waited for him to emerge but the journalist hasn’t been seen since.

Oct. 4: The Saudi Arabian Consulate in Istanbul said Khashoggi had left the building and then disappeared. But reports from Turkish officials said they believed the columnist was still inside the building.

Oct. 6: Turkish officials were saying they believed the columnist, who had written critically about the Saudi royal family, had been killed in the consulate.

“We believe that the murder was premeditated and the body was subsequently moved out of the consulate,” an unnamed Turkish official told Reuters.

Oct. 8:  Turkish authorities summoned the Saudi ambassador, saying that the Saudis needed to provide evidence that the missing man had actually left the consulate.

“If he left, you must prove this, you will prove this, even if it’s with visuals,” Turkish President Recep Tayyip Erdogan said during a visit to Hungary. “Those who ask Turkish authorities, ‘Where is he?’ should first be asking, ‘How did this happen?'”

Oct. 9:  A week after Khashoggi disappeared, Turkish officials announced they would search the consulate. A spokesperson for the Turkish foreign affairs department said Saudi officials had indicated they were “open to co-operation.”

Oct. 13:  A Turkish newspaper printed an explosive claim, saying Khashoggi’s torture and killing had been recorded on his Apple Watch. The initial reports contained few details, but the paper reported that Turkish authorities had obtained the audio from the journalist’s iPhone, which he’d given to his fiancée before entering the consulate, and his iCloud account.

Oct. 14:  The Saudis caution other nations against making threats or imposing sanctions, saying if it is targeted, it will respond with greater action.”

Oct. 15:  The planned search of the consulate went ahead. The state-run Anadolu news agency said the Turkish investigative team include a prosecutor, deputy prosecutor, anti-terror police and forensic experts.

Oct. 17: A Turkish team searched the home of the Saudi consul, who had left the country not long after Khashoggi’s disappearance. The search coincided with a grisly news report that contained details from a purported recording of Khashoggi’s torture and slaughter.

The Washington Post chose to release what may be Khashoggi’s final column, an opinion piece calling for more free expression in Arab states.

Oct. 19: Saudi television says a preliminary investigation has concluded that Khashoggi is dead. The country’s intelligence chief was sacked and 18 people had been detained, state TV said. Speaking late Friday, Trump said he found the Saudi statement credible, and would be speaking with the crown prince.

Oct. 20: The Saudi public prosecutor says Khashoggi died in a “fist fight” inside the consulate.

QUESTIONS: If the Saudis have arrested 18 people in connection with the death, why are they not able to interview them to get first hand accounts as to what happened and what happened to the body? And then launch the prosecutions?

If this was a Saudi Intelligence Service operation, they will have to rename the service.