It’s a bizarre case of good news being bad news. And the messenger of the good news being vilified. I am talking about Dr Bettina Arndt and her national tour of universities with the evidence-based message that there is no rape crisis in our campuses, to counter the negative, scare-mongering narrative generated by a 2017 report.

In an article for quillette.com, Arndt explains:
“In August 2017, the Australian Human Rights Commission released the results of a million-dollar survey into sexual assault and harassment on university campuses, following years of lobbying by local activists. Designed to provide proof of the rape crisis, it proved to be a total fizzer. Only 0.8 per cent per year of the 30,000 surveyed reported any sexual assault, even using the broadest possible definition including “tricked into sex against your will” and sexual contact with a stranger on the bus or train trip to university. In response, the activists immediately shifted ground, issuing alarmist warnings about high levels of sexual violence which was actually low grade harassment, including staring, sexual jokes or comments.

The results were in, but I was the only journalist writing in mainstream media that day to celebrate our safe campuses. My news story included data from the NSW Bureau of Crime Statistics showing campuses are about 100 times safer than the rest of the community for young women.”

For her efforts, Arndt was attacked, deplatformed and shouted down whenever she attended a campus on the invitation of a student group. The good news was not welcome by a mob of activists who prefer to maintain faux outrage against her message, preferring to victimise female students and scare young men.

“Across the country, vice-chancellors kowtowed to the feminist activists with endless displays of virtue-signalling, promising to tackle the sexual violence with 24-hour help lines, sexual assault and harassment units, and sexual consent courses. I wrote to all our major universities posing a series of questions about why our cash-strapped universities are choosing to lie about the safety of our campuses, and risking scaring off Asian families from sending their daughters to study in this country. The result was endless weasel words from University media units—not one acknowledged that the whole thing is a farce.

“The newly appointed Federal Education Minister has been raising the issue with vice-chancellors, Senators are grilling bureaucrats in parliamentary committees, and there’s been much public discussion about the need for our universities to sign up to a Chicago charter.”

You can see Senator Amanda Stoker grilling one bureaucrat on the subject, at a Senates hearing on October 25, 2018.

Senator James Paterson also managed to get Saunders to admit it is not appropriate to charge the peaceful attendee students security fees. 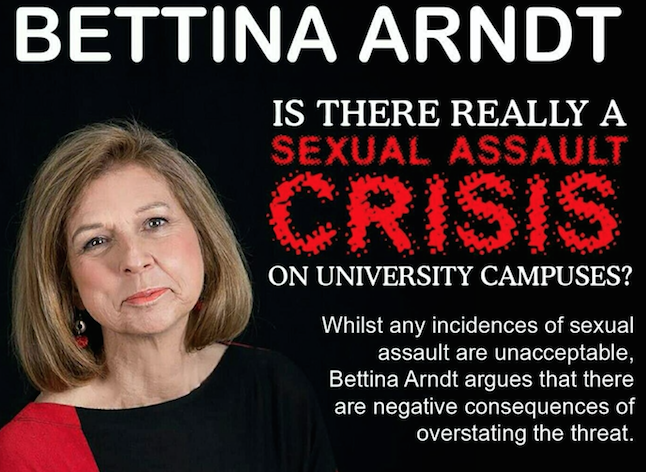 Arndt’s next appearance will be at the Macquarie University Liberal Club, Sydney, on Wednesday, November 7, 2018
Info: macqliberalclub@gmail.com