Just a bunch of white males …

We get a bad rep these days, men. Whether middle aged or old … We are the all powerful patriarchy, suppressing women and gays, racist the lot of us, sexist and misogynistic. And too much mansplaining. We’ve had it too good throughout history. But some of us have made a difference to the world – ending slavery, inventing the phone, curing disease, stuff like that. And computing…

Here is a totally random selection of a dozen or so (some middle aged) white men the world can thank for having been around – without whom there would have been and might still be more misery (and less knowledge) than a feminist can point a stick at. A similar list of  women who have made huge contributions to the world could be put together – but it is men who are being disparaged, not women. This is in their (our) defence.

William Wilberforce (1759 – 1833) became a member of the English Parliament in 1780, aged 21. Ten years later, together with the energetic abolitionists Thomas Clarkson, Granville Sharp and other members of the Clapham Sect, white men all, he began to lobby strenuously for the abolition of the slave trade and for 18 years regularly introduced anti-slavery motions in the Parliament, until the abolition of the slave trade in 1807. He was 48. He died in 1833, shortly after the act to free all slaves still in the British Empire passed through the House of Commons. He was also closely involved with the Royal Society for the Prevention of Cruelty to Animals.

Copernicus (1473 – 1543) was a Polish astronomer whose major work ‘De Revolutionibus Orbium Coelestium’ (‘On the Revolutions of the Celestial Spheres’) was finished by 1530. He was 57. Its central theory was that the Earth rotates daily on its axis and revolves yearly around the sun. He also argued that the planets circled the Sun. This challenged the long held view that the Earth was stationary at the centre of the universe with all the planets, the Moon and the Sun rotating around it.

Galileo Galilei (1564 – 1642) In 1609, Galileo heard about the invention of the telescope in Holland. Without having seen an example, he constructed a superior version and made many astronomical discoveries. In 1614, Galileo was accused of heresy for his support of the Copernican theory that the sun was at the centre of the solar system. This was revolutionary at a time when most people believed the Earth was in this central position. Two years later the Inquisition sentenced him to life imprisonment, commuted to house arrest.

Joseph Bazalgette (1819 – 1891) As chief engineer to London’s metropolitan board of works in the mid-19th century, Joseph Bazalgette had a significant impact both on London’s appearance and, through his design of an efficient sewage system, on the health of its inhabitants. In the mid-19th century, London was suffering from recurring epidemics of cholera. In 1853 – 1854 more than 10,000 Londoners were killed by the disease. It was thought at the time to be caused by foul air. The hot summer of 1858 created the ‘Great Stink of London’, which overwhelmed all those who went near the Thames – including the occupants of Parliament. This, together with the frequent occurrence of cholera, gave impetus to legislation enabling the metropolitan board to begin work on sewers and street improvements. By 1866 most of London was connected to a sewer network devised by Bazalgette. Bazalgette continued to train young civil engineers and provide independent advice to other British towns and cities – as well as places as far apart as Budapest and Port Louis, Mauritius. 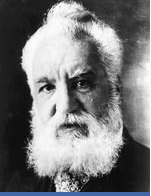 Alexander Graham Bell (1847 – 1922) was born in Edinburgh but ended up in America. Always fascinated by the idea of transmitting speech, he founded a school in Boston to train teachers of the deaf. By 1875 he had come up with a simple receiver that could turn electricity into sound. Others were working along the same lines, including an Italian-American Antonio Meucci (1808 – 1889) and debate continues as to who should be credited with inventing the telephone. However, Bell was granted a patent for the telephone on 7 March 1876 and it developed quickly. Within a year the first telephone exchange was built in Connecticut and the Bell Telephone Company was created in 1877. In 1888, Bell was one of the founding members of the National Geographic Society, and served as its president from 1896 to 1904, also helping to establish its journal.

Leonardo de Vinci (1452 – 1519) was one of the great creative minds of the Italian Renaissance, hugely influential as an artist and sculptor but also immensely talented as an engineer, scientist and inventor. He ‘invented’ the bicycle, airplane, helicopter, and parachute some 500 years ahead of their time. From 1495 to 1497 he produced a mural of ‘The Last Supper’ in the refectory of the Monastery of Santa Maria delle Grazie, Milan.

Charles Darwin (1809 – 1882) Charles Darwin’s theory of evolution by natural selection made us rethink our place in the world. The idea that humans shared a common ancestor with apes was a challenge to the foundations of western civilisation. Darwin kept silent for 20 years before going public and was only half joking when he described writing his book ‘On the Origin of Species’ as ‘like confessing a murder’. This is the story of one man’s struggle with the most radical idea of all time.

Sigmund Freud (1856 – 1939) Freud was an Austrian neurologist and the founder of psychoanalysis, who created an entirely new approach to the understanding of the human personality. He is regarded as one of the most influential – and controversial – minds of the 20th century.  In 1900, his major work ‘The Interpretation of Dreams’ was published in which Freud analysed dreams in terms of unconscious desires and experiences. In 1902, Freud was appointed Professor of Neuropathology at the University of Vienna. In 1933, the Nazis publicly burnt a number of Freud’s books.

Dr Ignaz Semmelweiss (1818 – 1865) was a Hungarian physician of German ancestry, who came to be described as ‘the saviour of mothers’. He discovered that the incidence of childbed fever – puerperal fever – could be drastically cut by the use of hand disinfection. Semmelweis proposed the practice of washing hands with chlorinated lime solutions in 1847 while working in Vienna General Hospital‘s First Obstetrical Clinic, where doctors’ wards had three times the mortality of midwives’ wards. His ideas were rejected by the medical community. Semmelweis could offer no acceptable scientific explanation for his findings, and some doctors were offended at the suggestion that they should wash their hands and mocked him for it. Semmelweis’s practice earned widespread acceptance only years after his death, when the French chemist Louis Pasteur (1822 – 1896) confirmed the germ theory.

Albert Einstein (1879 – 1955) Einstein died aged 76 from an abdominal internal bleed, which he refused to have treated. Despite making perhaps the single greatest contribution to our understanding of the Universe, he died frustrated by his failure to reconcile his theories with the new world of quantum physics, a struggle which is continued by physicists today. “The origin of all technical achievements is the divine curiosity and the play instinct.”

Edward Jenner (1749 – 1823) The father of immunology. The son of the local vicar, at the age of 14, he was apprenticed to a local surgeon and then trained in London. In 1772, he returned to Berkeley and spent most the rest of his career as a doctor in his native town. In 1796, he carried out his now famous experiment on eight-year-old James Phipps. Jenner inserted pus taken from a cowpox pustule and inserted it into an incision on the boy’s arm. He was testing his theory, drawn from the folklore of the countryside, that milkmaids who suffered the mild disease of cowpox never contracted smallpox, one of the greatest killers of the period, particularly among children. Jenner subsequently proved that having been inoculated with cowpox Phipps was immune to smallpox.  Jenner was widely ridiculed, until the Royal Society finally published his ‘revolutionary’ ideas in 1798. Jenner coined the word vaccine from the Latin ‘vacca’ for cow.

Sir Francis Bacon (1561 – 1626) Contrary to the views of many of his time (who thought that if sufficiently clever men discussed a subject long enough, the truth would eventually be discovered) Bacon argued that truth required evidence from the real world. He published his ideas, initially in ‘Novum Organum’ (1620), an account of the correct method of acquiring natural knowledge. He is regarded as the pioneer of modern scientific thought.

Charles Babbage (1791 – 1871) The 1820s saw Babbage work on his ‘Difference Engine’, a machine which could perform mathematical calculations. A six-wheeled model was initially constructed and demonstrated to a number of audiences. He then developed plans for a bigger, better, machine – Difference Engine 2. He also worked on another invention, the more complex Analytical Engine, a revolutionary device on which his fame as a computer pioneer now largely rests. It was intended to be able to perform any arithmetical calculation using punched cards that would deliver the instructions, as well as a memory unit to store numbers and many other fundamental components of today’s computers.

With grateful acknowledgment to the BBC’s archives online.

This entry was posted in By The Way. Bookmark the permalink.