Once upon a time, many climate conferences ago (another 120 are scheduled for January 2021 alone, according to World Academy of Science, Engineering & Technology), Al ‘Almost-president’ Gore warned us of an impending “tipping point” in global warming with his movie, The Inconvenient Truth. A real blast of a film. Polar bears were dying off, the north pole was melting, the seas were rising, fires were raging and soon, we would be at the tipping point: it would be too late for the planet.

His alarmism was supported by falsified research data (remember the temperature hockey stick?) and images of forests on fire, drought stricken lands. The filmmakers took some stock footage and labelled it all the result of ‘global warming’. His alarmist film was acclaimed, even at the 2006 Cannes Film Festival, where I interviewed him about it.

We sat at the rooftop cafe of the Noga Hilton, overlooking the impossibly beautiful Mediterranean coast of southern France. He sat with his back to it. He was earnest. I was curious. Not just about his global warming pitch, which seemed like a Brothers Grimm sort of tale, but about the man who in 2000 was a hanging shard short of the Presidency of the Unites States. He came across more like a salesman, though …

Al Gore was spruiking renewables; he has long ago ‘taken a position’ in renewables. He put his money where his mouth could spruik it.

With that tipping point still out of sight a dozen years later, child climate prophet Greta Thunberg came along and re-agitated that the End is Nigh ….

The ever escalating warnings – from threat to crisis to catastrophe and emergency – are increasingly shrill but decreasingly effective. The public’s panic is waning (see below) over global warming. That’s the emergency for the manipulators of the world’s political & economic levers – the UN, the World Economic Forum, and Joe Biden, among them. The Great Resetters. They feel compelled to heat up (sorry) the topic by just declaring a Climate Emergency. It’s not a grassroots movement.

But the ‘Free Beer Tomorrow’ sign no longer works for most – except the Greens.

Australia
In the 2019 Australian federal ‘climate change election’, 24 percent of voters felt that economic management was the most important election issue, followed by health and Medicare. Taxation came in third at 12 percent, ahead of global warming at 10 percent. Note that the Greens won 10.4 percent of the votes. 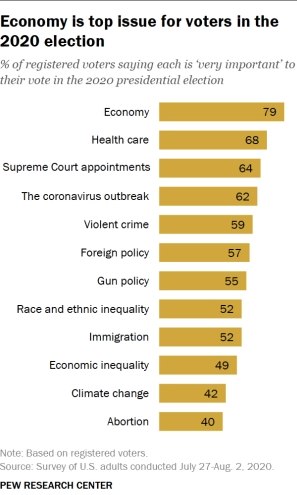 After the 2020 US Presidential election, Pew Research compiled the 20 ‘most striking findings’ from its research. Climate change was not an issue in any of them. Earlier, in Pew’s July-August 2020 list of ‘Important issues in the 2020 election’, climate change came second to last (out of 12), just above abortion. Twice as many Democrats were concerned about climate change as Republicans, but 15 percent registered ‘don’t know’ on the subject.

Europe
Then there is Europe. In September 2020 in VOXeu, ‘Research-based policy analysis and commentary from leading economists’, Andrew Oswald and Adam Nowakowski published a column with the headline: ‘Climate change complacency in Europe’.

Do our citizens care much about climate change? This column provides evidence that the answer is no. Using data on 70,000 randomly sampled people from the European Social Survey and the Eurobarometer, it shows that people exhibit low levels of worry about climate change, especially in cooler countries, and do not even believe that collective action would work. Climate change is viewed as less important than parochial issues such as inflation, health and social security, unemployment, and the economic situation.

The authors can’t be accused of being ‘deniers’ or biased against ‘climate change’ alarmism, or even of being objective on the subject. They conclude with dismay that “It appears our unborn great grandchildren may simply be left to their fate unless we can urgently find innovative ways to change people’s feelings about climate change.”

They are so disturbed that Europeans are unconcerned about climate change, they have bundled the topic together with ‘the environment and energy issues’ in tabulating the ranking of concerns. Environment is the sweetener, of course.

Russia
The once authoritative British (now woke) weekly, The Economist, had a story recently under the headline ‘Why Russia is ambivalent about global warming’ followed by a revealing subheading: ‘Climate issue: Global warming is not all bad, some Russians unfortunately reckon’. If only they worried more ….

The earth grew greener, leafier by 18 million square miles in the 33 years to 2016 (Nature Climate Change), thanks in part to lots of life supporting carbon dioxide in the atmosphere. Meanwhile … the Brookings Institute’s Elaine Kamarck was pushing the panic button:

“As the climate crisis becomes more serious and more obvious, Americans remain resistant to decisive and comprehensive action on climate change. In “The Uninhabitable Earth: Life After Warming,” David Wallace-Wells paints a frightening picture of the coming environmental apocalypse. Whole parts of the globe will become too hot for human habitation and those left behind will die of heat. Diseases will increase and mutate. Food shortages will become chronic as we fail to move agriculture from one climate to another. Whole countries like Bangladesh and parts of other countries like Miami will be underwater. Shortages of fresh water will affect humans and agriculture. The oceans will die, the air will get dirtier. “But,” as Wallace-Wells argues, “what lies between us and extinction is horrifying enough …”