While bad science and bad public policy may be overturned in a democracy in the long run, they can inflict a great deal of harm in the short term, as authors of one of the key chapters in Climate change the facts 2020 (Institute of Public Affairs) explain. This fast-selling fourth edition in the series (out January 2021), presents the most up to date scientific knowledge and links it to often disturbing and/or destructive policies in the public domain, from governments to universities.

THE GOOD NEWS: there is no danger of a ‘catastrophic climate change’ emergency; THE BAD NEWS: misinformation and falsified data are being used by activists (some disguised as scientists) to hustle policy makers into bad policy decisions. 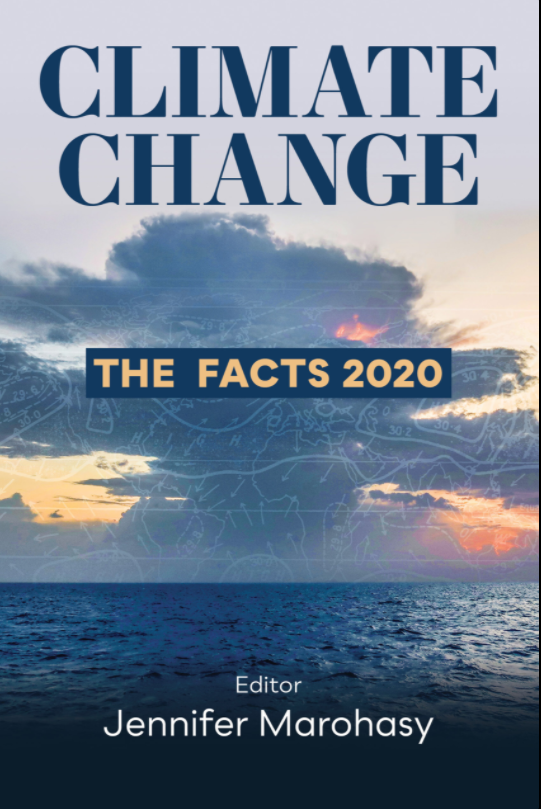 With 20 chapters authored by scientists, economists and other experts, the diversity is supported by scholarship. Edited by Dr Jennifer Marohasy (who also contributes to four chapters) the book presents facts – including some rebuttal of questionable facts circulating in our political ‘atmosphere’, and argues for better data integrity … in other words, more honesty than spin. I found the chapters on clouds, water vapour and the sun especially informative and Dr Henrik Svensmark’s chapter on Cosmoclimatology is a real blast. He begins: “Climate changes of the past were so large that they affected the conditions for life on earth. It may seem crazy, but who would imagine that these changes are influenced by energetic atomic particles that rain down on us from distant reaches of the Milky Way?” That got my attention!

Chapter 19 – with the wonderful title, Of Blind Beetles and Shapeshifting Birds: Research Grants and Climate Catastrophism, is one of the book’s most pertinent and pragmatic chapters in demonstrating how advocating for bad science leads to bad policy, harming the economy – and sometimes democracy, too. The title refers to some of the more ‘exotic’ research grant applications to the Australian Research Council. Some researchers have had to adapt a proposal that might have had some intrinsic scientific merit, in order to justify it on the grounds of global warming – because that approach is highly likely to be rewarded.

Chapter 19, authored by Dr Paul McFadyen, Scott Hargeaves and Dr Bella d’Abrera argues that with climate change, the key determinants in the development of national and international climate change public policy are:

* the methodology for the funding of science, which creates perverse incentives

In their conclusion, the authors point to ‘a trust misplaced’. “Leaders in government rely on the authority of the scientific institutions to guide and justify their decisions. True science does not rely on the authority of the speaker but on the evidence provided. However this is not the way that public policy in government is made. Ministers and policy bureaucrats do not have the capacity or the time to assess the scientific evidence so they rely of scientific institutions. It is a matter of trust and if this trust is based on a self interested funding methodology, it is a trust missed placed. We must seek a better way.”

And as Marohasy points out in her introduction to the book, “It could be, as Ansley Kellow explains in Chapter 18, that climate science has demonstrated noble cause corruption, where the ends justify the means or where there is a belief in a moral commitment in producing evidence – any evidence – intended to have an influence on the political landscape. A fact is something that is known or proven to be true. A scientific fact cannot be established by a consensus of opinion or by the popular vote or because it is morally good. The fact may contain defensive information but may still be true.”