Perhaps the biggest mistake of the American intel world is to have imagined that Russians think like Americans. They don’t, writes Rebekah Koffler in her authoritative and alarming book Putin’s Playbook – Russia’s Secret Plan to Defeat America (Wilkinson), a page-turner revealing Russia’s multi-pronged, psychologically mature war against the US, masterminded by Putin over decades.

From that mistake flow thousands of others, some small and inconsequential, many with dire consequences for misunderstanding Russian intent and action. It takes a Russian to know a Russian… and Rebekah Koffler is Russian-born and raised, in Kazakhstan. With her native Russian language skills and her lived experience of life under Soviet rule, coupled with her love of America and its freedoms, she was the perfect intelligence analyst inside the US security community. She knows her onions …

She weaves personal insights together with the professional … including some severe frustrations she had to overcome at the hands of the ‘bean counters’ and government bureaucracy. We also learn the immense value of an official parking space in Washington DC.

Aside from the volume of information about the workings of Russian secret service operations, the US intel network and how its bureaucracy is often more a hinderance than help, the book is a working primer on the way intelligence agencies operate – notably Russia’s.

As for its relevance, it is perhaps the most urgently relevant book published in recent times – when Western leaders are intimidated by Putin and ignorant of why and how his secret plan works.

Among the many insights, election interference is a topic relevant also to Australians:

“An elections outcome is traditionally not the main goal of Russian active-measure operations. Nor does Moscow typically have a specific political preference. It doesn’t vote Democrat or Republican. It votes ‘anti American. While the criminal normally prefers a presidential candidate who would pursue a friendly foreign policy towards Russia, the Russians are not unrealistically optimistic about their own ability to sway the US vote in a specific direction. Instead, they use election interference to damage the reputation of the candidates, create dissent within American Society on important issues, undermine Americans’ faith in the integrity of the electoral process, diminish US defence policy planners’ ability to augment America’s military might and to pursue other similar objectives….Having pressed the right hot buttons, Russia’s strategy  to agitate American voters into a frenzy worked,” writes Koffler. And continues to work.

The Russians accurately assessed how polarized American society was – partly because Russia itself had done all it could to covertly encourage the polarisation – and were able to manipulate those societal divisions to drive upheaval.

This is but a tiny insight into Koffler’s astonishing revelations about the secret world of intelligence as warfare. Koffler’s book is as important to world leaders as it is to the US policy makers and intelligence operatives.

It is also an unparalleled insight into Russia itself, into Putin and his predecessors, into the mindset that the West has failed to analyse and understand – to its great existential peril.

By the book’s Epilogue, it is clear that the Washington establishment’s foreign affairs “expertise” is woefully uninformed, not only about Russia but Afghanistan and everywhere else. And “anyone who dares to challenge their longstanding groupthink analytic line or policy prescription is a threat to their self-appointed ‘expert ‘title and cushy nine to five government job with ‘extra’ benefits.” Those observations add to the very real discomfort of knowing that Putin has a plan … and Washington’s ‘intelligence community’ is not so accurately named. It has consistently ignored the warning signs of a pending war with a security obsessed Russia.

Koffler attempts to correct those failures with five powerful and valuable recommendations. If only ‘they’ would listen …

Putin’s Playbook, a plan developed on the foundation of the Russian character and Russian history. His invasion of Ukraine in February 2022 is not the act of a madman. It is part of his carefully considered plan, in which Western weakness (think Obama and Biden) has been a major factor. Koffler describes Putin as “a brilliant tactician and a skilful strategist”. 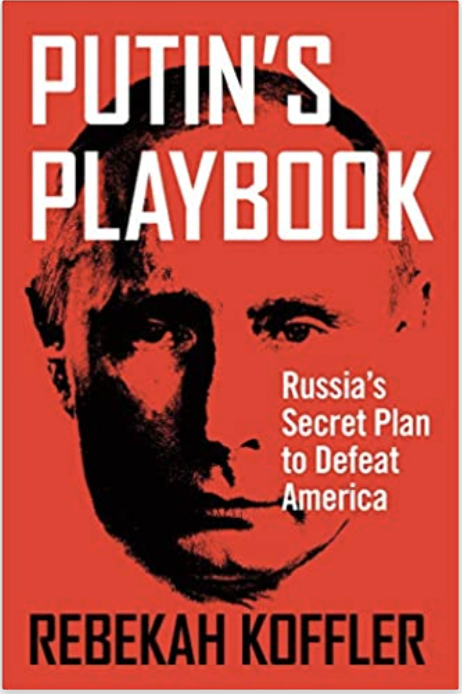 He has ingested the philosophies of judo, Sun Tzu’s art of war and the tools of psychological analysis in order to Make Russia Great Again. “It is only by entering the victim’s mindset and understanding his likes and dislikes, his biases and dreams, that the aggressor can manipulate the victim step by step into misperceiving reality, coming to wrong conclusions and taking steps predetermined and desired by the aggressor toward his own destruction. It’s all about psychology.”

“The ‘Russian collusion’ hoax not only poisoned American politics but also sowed confusion about the real Russian threat to the United States.”