The mental cruelty inflicted on the people of the western world by dishonest, unscientific and terrifying claims about man made global warming has sunk to the lowest possible level: activists enlisting young children to spout their mindless alarmism. The world will end in 12 years if we do nothing (urgently, more…), they proclaim, thanks to a callow woman new to the US Senate … and pre-teens are echoing this with the fervour of the new converts, although totally ignorant. The adults responsible should be ashamed – and punished. Cruelty to children is a whopping crime.

But the fault also lies with the political class whose members have years ago abandoned the principles of the enlightenment which urges evidence based actions, wrongly manufacturing their own consensus among scientists. Well, if 97% of scientists now agree that fossil fuels drive global warming so the science is settled, why do taxpayers in the western world keep pouring research grants into the climate swamp?

The fervour of climate alarmists grows every month, it seems, fanned by the fires of advocacy that were lit many years ago. Like the slowly encroaching Chinese in the South China Sea, they were allowed to inch forward by those who knew better but didn’t have the fervour to protest – or were held in check by the lynch mob of climate warriors, egged on by the likes of renewables millionaire Al Gore and scientists who are a disgrace to the profession.

Ever since the ‘original sin’ 30 years ago, the study of climate change has been blighted by the narrow and unscientific framing of its objectives in terms of an anthropogenic cause: burning of fossil fuels, notably coal. Carbon dioxide was pre-selected as the forcing agent for global warming when the IPCC was established.

“The IPCC produces reports that support the United Nations Framework Convention on Climate Change (UNFCCC), which is the main international treaty on climate change. The ultimate objective of the UNFCCC is to “stabilize greenhouse gas concentrations in the atmosphere at a level that would prevent dangerous anthropogenic [i.e., human-induced] interference with the climate system”.

Fusing together the fear of dangerous global warming with the guilt of mankind’s own activities, those fools let loose a phenomenon that became a virus-like ideology, a religion-like cult, escaping the safety of diligent science into the wilds of hysteria. Sucked in to its vortex were not only easily fooled politicians but a mass media that lost its natural professional scepticism, ironically casting blame on the so called sceptics for asking the questions they themselves should have.

It is perhaps not too late to try and inject some genuine scepticism into the raging, self destructive and scare-mongering debate. Or is it pointless? Do the facts really matter to the heaving alarmists? Perhaps we can save some of the children from nightmares if we can reassure them that the world is not going end in a dozen years, nor will we burn up in a fireball caused by burning coal to generate electricity.

Dear Children,
Do not be afraid of climate change
The world’s climate changes slowly over time and has done for millions of years. There was an ice age, I am sure you’ll heave heard of that. Then it warmed up. There was a warmer period – all before man started burning fossil fuels. Then it cooled down. Climate is produced on earth by many, many variable things (from the sun’s activities to the oceans and much else) and the scientific study of climate is still exploring and searching its many facets. Don’t be scared; there is no climate crisis. Some people just don’t know the facts and some people hope to benefit (one way or another) from scaring you and all of us.

Carbon dioxide from burning coal is not warming the planet
You may have heard that burning coal produces carbon dioxide and that heats the planet. Australia’s Chief Scientist, Dr Alan Finkel has explained to a Senate Committee that even if Australia stopped burning coal entirely, it would make “virtually no difference” to the climate. And acclaimed Australian geologist (a key science in this field) Dr Ian Plimer has written several books on this subject.

In his latest book he puts the scientific view about this matter very simply: “Annual human emissions of carbon dioxide (3% of the total) are said by alarmists to drive global warming. This has never been shown. If it could be shown, then it would also have to be shown that natural emissions (97%) don’t drive global warming.”

That’s right; human emissions of CO2 make up just 3% of the total CO2 in the atmosphere, and Australia’s contribution is about 1.3% of the 3%.

Next time you are talking about climate change in class, use this simple but important reference to reassure your classmates about burning coal to make electricity. And not just for us, but for millions of poor villagers in India and elsewhere, who do not yet have access to electricity (due to lack of coal) and have to use dung and other ‘dirty’ fuels to cook in their huts, leading to health risks for them and their children. 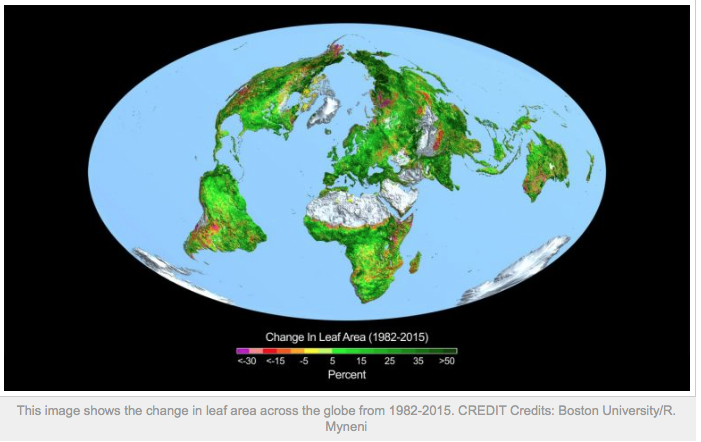 As you probably know, carbon dioxide is the food of plants. It greens the planet. Increases in atmospheric CO2 over 33 years (to 2016) has meant increases in the planet’s greenery by 18 million square miles – about twice the size of Australia, a University of China study has found. Help spread this good news, to counter all that alarming stuff about climate change.

And if someone doesn’t welcome the good news, ask them why not?