Here in a nutshell, is the problem with the media’s coverage of climate change: on June 14, The New York Times‘ high profile David Leonhardt leads the online edition with an op-ed about heavy flooding in some areas of the US. And he states as fact that while “You can’t blame any one storm or flood on climate change. You can blame the increasing frequency of storms and floods on climate change.” This is totally false..

Anyone can discover this to be untrue in the scientific sense. What is true is that The New York Times is no longer read by anyone other than climate alarmists, but that’s precisely why it matters: it is they who need to be better informed. Propaganda such as Leonhardt’s is the problem for us all, since these assertions feed into (misguided) policy making. When all the media (Australian included) is spouting the same lines, the political class will be corrupted by it. Has been corrupted by it.

Throughout modern history, regimes that managed to control the media used this as the method for stuffing rubbish into the heads of their people. Most recently, the Chinese communist party’s government controlled media blamed foreign agitators for the Hong Kong demonstrations against proposed extradition laws. That was the only story the Chinese populace was given.

But Leonhard does, in his hubris, let some cats out of the bag:

Leonhardt and his peers in the press (see Time cover, June 23 – below) 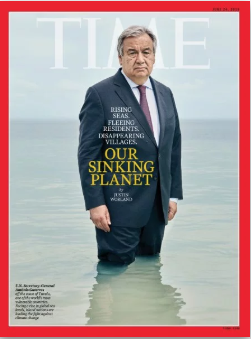 Just the day before Leonhardt’s NYT article, Curry published extracts from her testimony that had been prepared for an upcoming (now delayed) House Oversight and Reform Committee on Natural Disasters in the Wake of Climate Change.

“In summary, the trend signal in hurricane activity has not yet had time to rise above the background variability of natural processes. Manmade climate change may have caused changes in hurricane activity that are not yet detectable due to the small magnitude of these changes compared to estimated natural variability, or due to observational limitations. But at this point, there is no convincing evidence that manmade global warming has caused a change in hurricane activity.”

She also addresses the strategy behind extreme alarmism. “Why is attributing extreme events (or not) to AGW such a big deal?  Well, the reason for this became apparent to me following Hurricane Katrina (2005), in the heyday of the hurricanes and global warming argument.

“Lets face it, in 2005 the public found it very hard to care about 1 degree or even 4 degrees of warming — heck, the temperatures varied by that much on a day-to-day basis.  If they wanted a slightly warmer or cooler climate, they could always move a few hundred miles to the north or south.

“However, arguments that a relatively small amount of global warming (order 1 C) could result in more intense hurricanes, well that got their attention, particularly as the U.S. was reeling from Katrina catastrophe.

“A corollary to this activist strategy is to scare school children, and enlist their help in politicizing the issue of climate change and extreme events and also convincing their parents.”

The propaganda and the misuse of children are evidence of the moral bankruptcy of the climate fanatics, underscored by their refusal to engage with the facts. It doesn’t take long to learn why the science is far from settled.

Curry says “Experts disagree on most aspects of climate change.  Why do they disagree? The main reasons are summarized as:

And the main reason we have such virulent social division and political conflict over climate-crazed energy policies is that the media has not done its job, asking the questions that call to account the politically motivated output of bodies such as the Intergovernmental Panel on Climate Change. What questions were ever asked to support the alarmist projections? What investigation was undertaken by our ever vigilant politically correct press about dozens of climate models over the past 20 years or more that were presented as forecasts, only for them all – ALL – to be embarrassingly wrong. Why?

Every journalist writing on the subject (and every politician, that includes you Zali Steggall) should read the book that disembowels the IPCC in an expose that reveals it for the political fornicator of science that it is, by Canada’s investigative journalist, Donna Laframboise. It’s wonderful title is The Delinquent Teenager Who Was Mistaken for the World’s Top Climate Expert. Its conclusion: almost nothing we’ve been told about the IPCC is actually true.