Live Not By Lies – but by free speech

Gulag survivor and author Aleksandr Solzhenitsyn famously said that one of the biggest mistakes people make is assuming totalitarianism can’t happen in their country. That’s the motivation for New York Times best selling author Rod Dreher’s new book, Live Not By Lies (Sentinel). Dreher reiterated the warning in an interview on Outsiders (Sky News, Sunday Oct 4, 2020) and stressed that Solzhenitsyn’s warning has taken on an urgency in the current frenzy of identity politics and cancel culture across the west.

Solzhenitsyn had first hand experience of totalitarianism in Soviet Russia, and so have millions of others. Thousands are still with us who, like me, escaped from the paws of communist regimes and are alarmed to find growing echoes here in the west, of those totalitarian elements that drove us away. Dozens of expat Russians told him how disturbed they are seeing what they call ‘soft totalitarianism’ emerging in America.

Where in communist regimes it was the state and its oppressive apparatus, the network of secret police and civilian informers that generated fear as a control mechanism, in the democracies of America and the rest of the Anglosphere, it is out of the hands of ruling politicians and in the hands of social (and socialist) activists.

When the Marxist train was derailed by resistant societies and communism was denied formal entry to the halls of power, a new strategy was forged: if societies cannot be forcibly entered through the front door of politics, they will be infiltrated through the back doors of institutions. 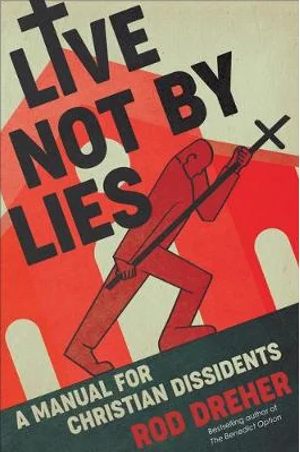 Dreher is the latest writer to raise the alarm. And he tells “the stories of modern-day dissidents–clergy, laity, martyrs, and confessors from the Soviet Union and the captive nations of Europe–who offer practical advice for how to identify and resist totalitarianism in our time. Following the model offered by a prophetic World War II-era pastor who prepared believers in his Eastern European home to endure the coming of communism, Live Not By Lies teaches American Christians a method for resistance:
•  SEE: Acknowledge the reality of the situation.
•  JUDGE: Assess reality in the light of what we as Christians know to be true.
•  ACT: Take action to protect truth.”

Of course it is not only American Christians (I am an atheist, for example) who need to be aware of and prepare to push back. And taking action to protect the truth is the challenge. That is exactly what cancel culture attacks every day in every aspect of life, from education to science, from speech to even thought. Shrieking cancel culture activists exact a heavy price on transgressors, whether you are a writer, cake maker or a corporation. As then, writes Dreher, so now: conform – or pay the price. “Everybody says that they have no choice but to conform, says Solzhenitsyn, and to accept powerlessness. But that is the lie that gives all the other lies their malign force. The ordinary man may not be able to overturn the kingdom of lies, but he can at least say that he is not going to be its loyal subject.”

Another malign manifestation of that movement is Marxist opportunists under the unassailable label of Black Lives Matter, who confront people in the streets and cafes demanding they say the words ‘black lives matter’. Before they hurl a Molotov cocktail into a car or smash a shop front. Take a knee and submit, or be labelled a racist. In the communist system, the pejorative label would be ‘counter revolutionary’ or ‘enemy of the people’. Shamed and humiliated in public, your Marxist judges use intimidation to control not just what you do, but what you say … and therefore have to think.

Cancel culture radiates fear much the same way as ‘the party line’ does in communist regimes – past, eg Soviet Russia and present, eg China. Where in China citizens fear being taken away for breaches of the party line by ‘authorised agents’ of the state (much like the ones Victorian Premier Dan Andrews wants to foist on his state), in our society, that job is performed by self appointed, overzealous overseers who can hound offenders out of reputations, careers and livelihoods.

This purging has been going on for a while now, a relentless white anting of society and commerce. (I’m safe from charges of racism here because ‘white anting’ has negative connotations.) The only difference between this sort of political oppression is that it is performed without guns and torture. So far …

Yes, but social media is a highly efficient weapon of its own.

As I wrote in Spectator Australia in August 10, 2020 (Woke notes), “Social media is rife with condemnations by narrow minded, foul mouthed, mean spirited cowards and bullies – just like the Communist Party I knew.”

As in communist regimes, citizens who reject the fearsome political correctness have nowhere to go to seek safety from the party enforcers. The State won’t protect you – just look at how useless our politicians are protecting free speech. As Dreher puts it, “this progressive militancy … is empowered by unprecedented technological capabilities to surveil private life. There is virtually nowhere to hide.”

Then there’s that pernicious ooze of galactic waste labelled identity politics. This is the weapon that seeks to destroy western culture at its very core. As Douglas Murray puts it in his book, The Madness of Crowds: Gander, Race and Identity (Bloomsbury): “If somebody has the competency to do something, and the desire to do something, then nothing about their race, sex or sexual orientation should hold them back. But minimizing difference is not the same as pretending difference does not exist. To assume that sex, sexuality and skin colour mean nothing would be ridiculous. But to assume that they mean everything will be fatal.” It will tear apart the entire society.

Dreher’s book provides a timely stimulus to demand that our elected representatives be pro-active in protecting free speech – in every instance and in every way – maybe even insisting that the ABC do the same. Free speech is the most powerful protection we have.