Peter Versi to the rescue

Italian Australian businessman Peter Versi is one individual who has made a difference and quietly enriched our democracy by his actions. Helped others. Donated time. Saved lives. Risked his own. And he didn’t do all that to boast on social media looking for ‘likes’. He just did it. We asked him to open up over dinner.

Greying now, but not slowing, with a disarming smile and a ready one liner (usually cheeky), Peter Versi was an energetic sportsman throughout his life, but his most admirable achievements were his generosity to charities and his life-saving rescues.

“I’ve spent a great deal of my life trying to help others. Of that I’m proud,” he says, “although sometimes my wife has called me a sucker for trying to give to people who may not deserve my benevolence. Don’t you know you’re being used? she’d often say. Perhaps I did know, but somehow I’ve always believed it was possible to win people’s hearts by showing them a little of my soul.”

I am sharing jokes and wine with Peter and his wife Katherine at a buzzy (Covid-safe) Thai restaurant in Sydney, amidst a good snow report from Perisher … which brings up the subject of that fateful season in Thredo in 1997.

“I closed my business for over a week to try and help the SES with their rescue efforts and then their recovery efforts,” Peter recalls. “I was over the moon that Stuart Diver came out alive.” Diver, Thredbo GM these days, had been in the news recently commenting on the 2020 season and the impact of the virus.

Prompted to remember more of the rescue effort, Peter recalled that “A friend of mine agreed to supply generators to run the lights so rescuers could work around the clock. Another friend had a wholesale butchery and he donated one ton of meat to feed the rescuers. A small manufacturer donated 500 waterproof jackets, another gave socks. A hotel group emptied their storeroom of spare towels and my local Woolies gave 200 loaves of bread. A courier gave us his refrigerated truck to deliver the meat and 2,000 chocolates as snacks for the rescuers.

“There was one multinational who refused to help, so I told them that as they were the only ones who refused, we would report it as news to the media. A huge box of sweets arrived within hours. The value of the goods we supplied to the SES was estimated at $350,000 . . . I could not be more proud of my staff who helped me with this effort. They never worked harder. The rep from the multinational asked me ‘what’s in it for you?’ A warm fuzzy feeling, I said.” 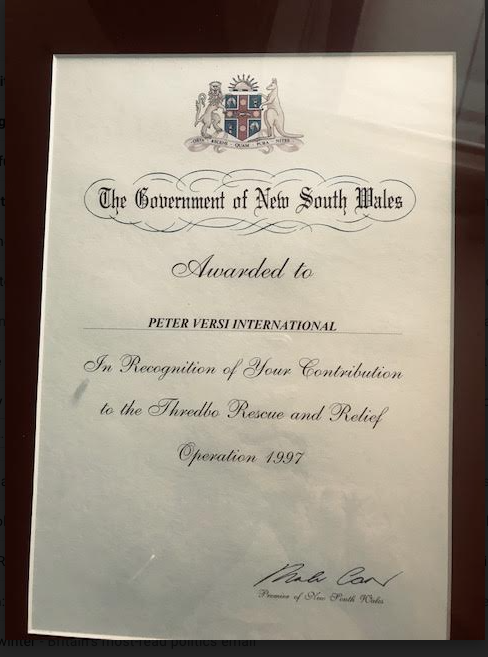 Peter did not make his efforts public, “but somehow it was reported in the newspapers and I received an award from Bob Carr, the then premier of NSW.”

By then, Peter had a bit of a history of rescues. “Back in 1978, I charged into the surf on the NSW south coast as my niece and my two step daughters had floated out to sea on a rubber dinghy and were in danger of drowning should it capsize. I swam out and pushed the dinghy across the current to a point at which it was less likely to be hit by waves, and the girls reached the safety of the beach. There was a strong rip, and my efforts had left me in the rip, and quite exhausted. A couple of times I thought I may not make it back to shore.”

He did, of course, being the strong swimmer he was. A few years later, it was Peter Versi to the rescue again!

“It was around 1990 … several families we knew were on the beach with us at Hawkes Nest, having a nice time, when I noticed that a teenager was caught in a rip and had called out that he was in trouble. I ran into the water to swim out to him ASAP. This was like being in a kitchen sink after someone had pulled the plug. It was a circular current. Impossible for him to swim out of even though he was only 30 meters from shore. I managed to pull him towards the perimeter of the current and threw him, as hard as I could, towards the beach. Then I realised just how hard the current was to combat and I was relieved when I was able to make it to shore.”

To his surprise and not a little annoyance, “everyone was still chatting and enjoying a beer. No-one even acknowledged the near tragedy. This young man turned up to provide a statement as to what I’d done, and that without me, he would not have lived to tell the story.”

Then, over another glass of red, he shared a joke …Let me tell you about my Irish Rugby mate. I asked him ….”Paddy, as I’m visiting Ireland soon, is there somewhere close to your ancestral home that you could recommend for us to stay?” “Certainly“ he said. “There’s a fine Inn just near where my grandparents lived. Its very rural and it’s 100 meters from the sea” ”Great Paddy “ I said. “and tell me Paddy, what can we do there?” “You can play tennis OR you can go fishing “ said Paddy. I replied “ Paddy don’t you mean I can play tennis AND I can go fishing ?” “Oh no“ he said. “WE’VE ONLY GOT ONE NET”.