Treat China as a political psychopath

In respect of China, “The dilemma for Australia is how to steer the ailing ship of state through the decoupling storm at a time of historic weakness and uncertainty,” according to Alan Dupont, CEO of geopolitical risk consultancy the Cognoscenti Group, writing in The Weekend Australian (Oct. 10/11, 2020)

In the spirit of debating that dilemma, it is arguable that the world’s nations should treat China’s Communist Party government either as a delinquent teenager who doesn’t know right from wrong, or more aptly perhaps, as a dangerous, uncaring psychopath.

The irresponsibility of mismanaging the emerging Covid19 virus smacks of the wild teenager, but the CCP’s overall behaviour smacks of the moral vacuum in which the CCP lives, with an inability to feel for the plight of others, even their own people. That’s beyond swaggering and bullying; that’s psychopathic. Lack of empathy is a tell-tale sign of the psychopath – perhaps the most revealing. The CCP’s lack of empathy knows no bounds, as evident from its own Uighurs to its pro-democracy dissidents in Hong Kong, to the millions of citizens around the world who have been infected by COVID19 and died or are sick. And of course, it imposes a brutal suppression on its citizens. 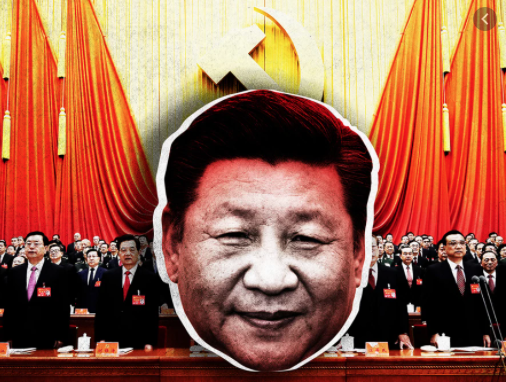 As the Mayo Clinic puts it “People with antisocial personality disorder tend to antagonize, manipulate or treat others harshly or with callous indifference. They show no guilt or remorse for their behavior.” For ‘people’ read the CCP, with the superficially charming and ever smiling (bingo! psycho!) President For Life Xie Jinping aka Narcissist For Life – another psycho characteristic – unchecked by either his own media or by his own party. In this case ‘own’ is a double entendre…

This unsolicited diagnosis of the CCP is not intended as merely vitriol, nor does it claim to be a medically informed one. It is meant to explore how the west should treat (as in deal with) the Chinese government, which occupies such a vast footprint in world affairs in every way. All the same, the diagnosis does note that one symptom of the condition is the very low tolerance to frustration and for the discharge of aggression. So for example, when Australia instigated that international investigation mentioned at the start of this article, China’s official response was belligerent. Exactly what might be expected of a psychopath.

The trade minister, Simon Birmingham, said the government was aware of the reports and was discussing the issue with Australia’s resources industry, which had “previously faced occasional disruptions to trade flows with China”.

So how might the West avoid vulnerabilities (eg over reliance on China for supplies, safeguarding our exports) but manage an ongoing relationship in a controlled manner? The question is really another way of asking how to stay mentally strong when dealing with China’s intimidation?

How’s this little checklist for starters (I’ve adapted it from one I found by author Amy Morin, at Inc.com), for all politicians and especially key ministers and leaders:

1 Present a calm demeanour at all times, show little emotion
2 Do not show that you are intimidated
3 Do not buy into China’s ‘third world status’ victim story nor its claims in the South China Seas
4 Keep the conversation focused on their actions
5 Be super vigilant of Chinese interference/influence in your domestic socio-political, academic and scientific life

And as author David Gillespie says about dealing with psychopaths, “their primary motivation is to extract loyalty and resources from you, and servitude. To survive that, you will need your friends and family constantly …” The West must be like family.