The January 5 runoff election for the last two vacant seats in the US Senate is a do or die affair for both Democrats and Republicans, as the result will determine which party has the majority in the Senate in the next term. The House of Representatives is still held by the Democrats – barely, after losing seats to the Republicans. If the Republicans retain control of the Senate, they will be useful to Joe Biden, so the political punditry wisdom goes, by acting as a brake against the most extreme demands of the loony left whose policies come from the socialist-inspired squad of Democrats.

Free health care for illegal migrants, welcomed at open borders, for example, effectively free health care for everyone in the world scrambling into the US. Biden would welcome that brake on extreme policies, so he can play the game of ‘I tried but they blocked me’. That’s the theory.

But … Joe Biden has a much more powerful and personal reason to want the Democrat candidates to win the Georgia runoff. It has nothing to do with policies. It would protect him from the existential threat of a Republican-led Senate that is itching to investigate the incriminating evidence found on Hunter Biden’s carelessly abandoned laptop – currently in a locked safe at the FBI, which is also investigating.

A crucial section of that evidence was published in an exclusive front page story by the New York Post (Oct. 14, 2020), but became the subject of furious censorship by all left leaning media in effective collusion with social media giants, Twitter and facebook, the gorillas in the mist of publishing. They claim to be mere platforms, like telephone companies, providing a medium for communication. But unlike telephone companies, they interfere in an editorial manner with the communication being carried. For now, they are getting away with it, still exempt under s230 of the Communications Decency Act which says that “No provider or user of an interactive computer service shall be treated as the publisher or speaker of any information provided by another information content provider”.

In other words, it permits internet companies to moderate/censor/edit content without being on the hook legally for everything they host. 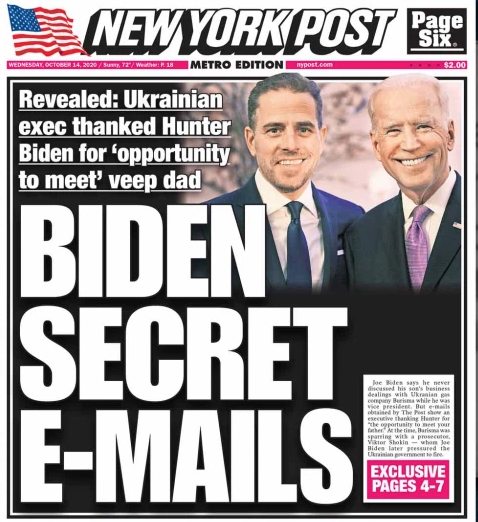 Hunter Biden’s old laptop delivered a massive payload of thousands of incriminating emails (not to mention some embarrassing personal photos, apparently) which reveal a plan to set up a joint venture with the Chinese that would provide substantial financial benefits, including shareholdings, to not only Hunter and his associates, but to ‘the Big Guy’ – whose shares would be held for him by Hunter.

It should be noted that the authenticity of the laptop was confirmed by a) Tony Bobulinski, the man hired to run the joint venture, on Tucker Carlson Tonight on Fox News (Oct 27, 2020), who also detailed his meetings with Joe Biden; b) by the absence of denials from the Biden family, and c) by Hunter’s lawyers asking for the return of the laptop (he had forgotten to collect it from a repair shop for over 6 months, so it became the property of the repairer, who initially handed it to the FBI).

Bobulinski, a retired lieutenant in the U.S. Navy, is the former CEO of SinoHawk Holdings, which he said was the partnership between the CEFC Chairman Ye Jianming and Biden family members. Many in his family also served the country and he was largely motivated and infuriated by the accusation from the Biden camp that he is some sort of Russian tool.

Bobulinski says Hunter Biden introduced him to the former vice president, saying: “This is Tony, dad, the individual I told you about that’s helping us with the business we are working and the Chinese.”

He told Carlson: “I remember saying (to Joe’s brother Jim), ‘How are you guys getting away with this?’ ‘Aren’t you concerned?'”. He claims that Jim Biden chuckled. “‘Plausible Deniability,’ he said it directly to me in a cabana at the Peninsula Hotel.”

The revelations could have blown up Biden’s bid for the White House, just a couple of weeks before the election – no wonder the left wanted it suppressed. Before the death of genuine journalism in the US (and elsewhere) that story would have ignited massive TV coverage, with professionally curious journalists seeking answers to questions, such as: ‘Mr Biden, Tony Bobulinski has claimed you were the ‘Big Guy’ for whom a 10% interest in SinoHawk Holdings was being held by Hunter. Will you confirm that?’

And ‘Mr Biden, you have always maintained you had nothing to do with nor had any knowledge of, Hunter’s business affairs; do you still maintain that?’ And ‘Mr Biden, Tony Bobulinski reveals meeting you to discuss aspects of the proposed joint venture with the Chinese – do you dispute that?’

As the New York Post reported (Oct 14, 2020) “Hunter Biden introduced his father, then-Vice President Joe Biden, to a top executive at a Ukrainian energy firm less than a year before the elder Biden pressured government officials in Ukraine into firing a prosecutor who was investigating the company, according to emails obtained by The Post.

“The never-before-revealed meeting is mentioned in a message of appreciation that Vadym Pozharskyi, an adviser to the board of Burisma, allegedly sent Hunter Biden on April 17, 2015, about a year after Hunter joined the Burisma board at a reported salary of US$50,000 a month.

“Dear Hunter, thank you for inviting me to DC and giving an opportunity to meet your father and spent [sic] some time together. It’s realty [sic] an honor and pleasure,” the email reads.

If Republicans win those two remaining Georgia Senate seats next month (irrespective of who is declared President), a Senate Committee will undoubtedly investigate if and how Joe Biden’s family benefited from his Vice Presidency … no matter what any (possibly pro-Biden biased) FBI investigation may do. Remember the Democrats’ fevered but unfounded pursuit of Donald Trump at the start of his Presidency; the Republicans would now return the favour – but this time there is hard evidence to back up the allegations.

This article also the cover story in the Spectator Australia, Dec. 5, 2020 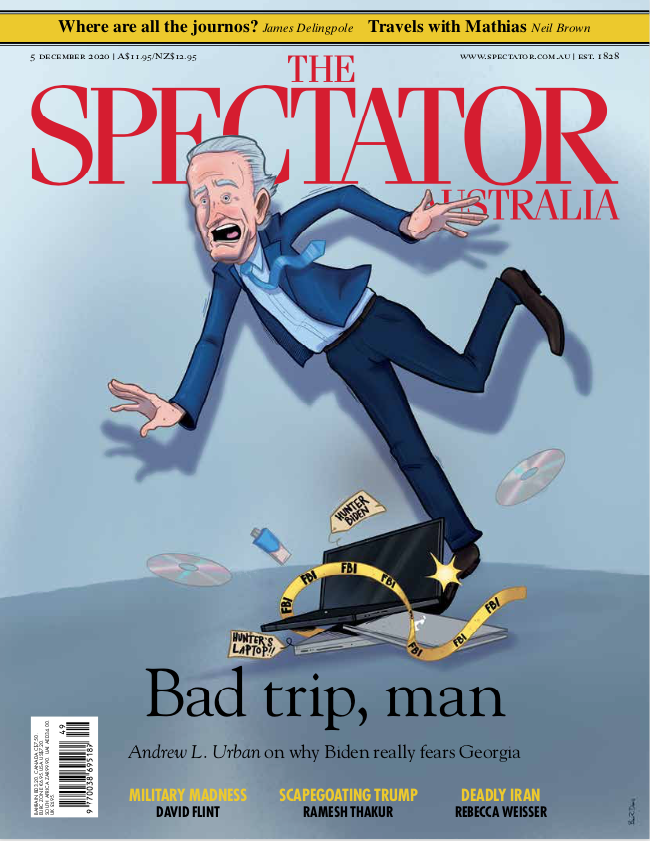 1 Response to Georgia on Joe’s mind