It’s the ‘man bites dog’ story of our times: Rebel News journalist Avi Yemeni is taking Victoria Police to the High Court (no less) as agents of the State of Victoria, for unlawful arrest. “Police claim they arrested me for not moving when the Police Commander asked me to,” Avi tweets “Problem is, he NEVER asked me anything.”

The entire confrontation was recorded on camera, footage which Avi has posted on his standwithavi.com web page inviting donations to fund his court case. Last time I looked (on the morning of Tuesday, Jan. 12, 2020) the fund had raised over $104,000. 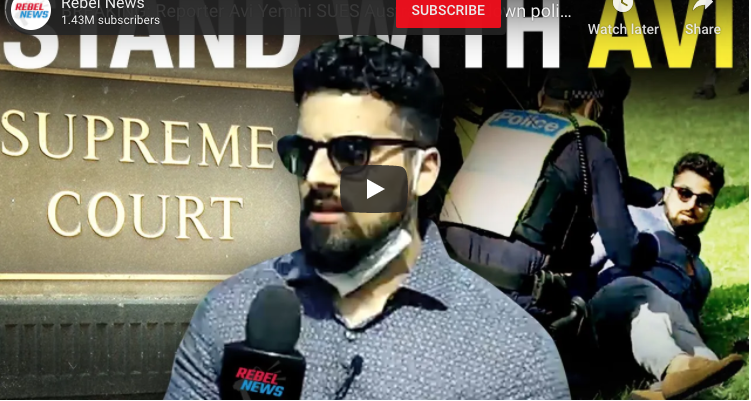 In his statement of claim, filed by his solicitor P.G. Hamilton of Smith & Tapper Lawyers, he outlines the events of Sept. 5, 2020 while he was “lawfully working as a journalist” in Albert Park, Victoria, covering an anti-lockdown protest. The police “purported to arrest the Plaintiff without warrant”. In the footage, Avi is seen to be wrestled to the ground, handcuffed and taken away in a police van, actions he claims were excessive, comprising ‘battery’.

The statement of claim includes allegations of similar treatment on Australia Day 2020, when he was covering the ‘pay the rent’ protest in the CBD.

Avi claims that he was not informed on what basis he was arrested in either instance.

Victoria Police do not have a good track record of policing with care, especially not in the year of Covid. Never mind that their excessive fervour in such instances make for poor public relations, it goes to a fundamental aspect of democracy: the people should not fear the police (or any other agent of the state).