Japan has issued its strongest condemnation of the Myanmar military coup, urging the military to “swiftly restore the country’s democratic political system”, as Canada and the UK joined the US in announcing targeted sanctions against the coup leaders.

Japanese Foreign Minister Toshimitsu Motegi issued a statement at the conclusion of a virtual meeting of Quad nations on Thursday night expressing “grave concern for the deteriorating situation in Myanmar”. 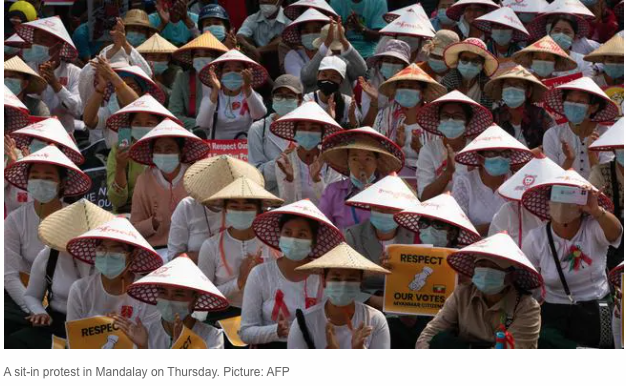 The statement came just hours before a 20-year-old woman became the first protester to die in anti-coup demonstrations on Friday. Mya Thwe Thwe Khaing was shot in the head with a live round by Myanmar police last week and had been on life support.

At least 520 people have been detained by the military Junta, including Ms Suu Kyi, senior officials from her National League for Democracy Party, President Win Myint, and an Australian economic adviser, Sean Turnell.

As one of the region’s biggest investors in Myanmar, and a country with strong links to the deposed civilian government and to the military dating back to World War II, Japan is considered key to an effective regional response to the coup that toppled the civilian government of Ms Suu Kyi on February 1 and imposed a one-year state of emergency.

Human Rights Watch Asia deputy director Phil Robertson told The Weekend Australian that Japan was one voice the Myanmar generals might listen to and that next week would be a key test of Tokyo’s resolve on the Myanmar crisis.