Democracy needs the power of truth

Information is power – and democracy needs the power of truth to fight the onslaught of authoritarian urges and ruling orthodoxies, such as the fanatical global warming aka climate change movement. Media has collectively failed democracies in its rush to support that movement, both by commission and omission. Here is an old-ish news story I found from May 16, 2018 (in investors.com, of all places) about the drop in global temperatures in the preceding two years according to NASA, that went largely unreported.

Writing in Real Clear Markets, Aaron Brown looked at the official NASA global temperature data and noticed something surprising. From February 2016 to February 2018, “global average temperatures dropped by 0.56 degrees Celsius.” That, he notes, is the biggest two-year drop in the past century.

Isn’t this just the sort of man-bites-dog story that the mainstream media always says is newsworthy?

In this case, it didn’t warrant any news coverage.

In fact, in the three weeks since Real Clear Markets ran Brown’s story, no other news outlet picked up on it. They did, however, find time to report on such things as tourism’s impact on climate change, how global warming will generate more hurricanes this year, and threaten fish habitats, and make islands uninhabitable. They wrote about a UN official saying that “our window of time for addressing climate change is closing very quickly.”

There was the study published in the American Meteorological Society’s Journal of Climate showing that climate models exaggerate global warming from CO2 emissions by as much as 45%. It was ignored.

Then there was the study in the journal Nature Geoscience that found that climate models were faulty, and that, as one of the authors put it, “We haven’t seen that rapid acceleration in warming after 2000 that we see in the models.”

Nor did the press see fit to report on findings from the University of Alabama-Huntsville showing that the Earth’s atmosphere appears to be less sensitive to changing CO2 levels than previously assumed.

How about the fact that the U.S. has cut CO2 emissions over the past 13 years faster than any other industrialized nation? Or that polar bear populations are increasing?

That was two years ago….below, today’s cartoon by John Spooner in The Australian – 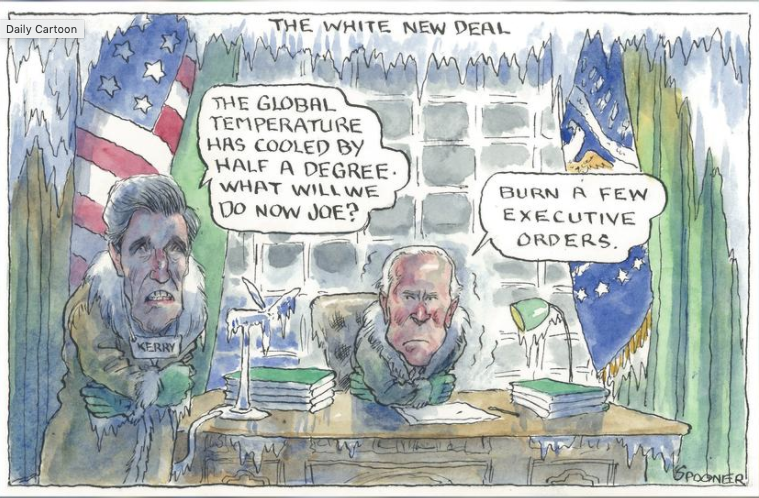