PETER VERSI reflects on some of the most fundamental aspects of the human condition – truth, justice, how war bends both – through his own life experiences. Guilt by accusation is not truth; truth is not always comfortable.

I have now, on many occasions, heard people talk about “my Truth “. There is a veiled inference in that term, which more than suggests the discomfort people experience when Their Truth, is not quite the same as The Truth.

Lindy Chamberlain, Gordon Wood, Cardinal Pell and many more, were all convicted by the truth sworn by others.

A truth they called the whole truth and nothing but the truth. That truth failed and lives were ruined.

Can you imagine how many people have been convicted on perception of truth with no real evidence.

It took 10 years or more, of Lindy Chamberlain’s determination to get, not just an overturning of the conviction, but a full acquittal, and finally a death certificate for her little girl saying Death by Dingo attack.

Why did it take so long when in fact the evidence which acquitted her was available at the beginning of her horror story.

We now live with “guilt by accusation“.

This is particularly true in any form of sexual crime or accusation. “You must believe the woman,“ said many newspaper articles. NO I say, don’t just believe the accuser, whether female or male: you must seek the truth.

For if you don’t, the presumption of innocence is just words without substance.

Now we are hearing that Australian soldiers may have killed innocent people in Afghanistan. It’s out, so we can’t sweep it under the carpet.

Send an armed twenty year old to war and you invite tragedy, as much for that soldier, as well as any person caught up in a war zone who comes into contact.

No one is ever psychologically prepared for what they will encounter, much less a teenager.

Despite a great deal of doubt about the War and the direction taken by the Military, he joined to protect his beloved city of Trieste and to protect the people he loved.

He had a mother and two brothers who would eventually be in the line of fire. For a year before entering the Army he had worked with the men of the Decima Flotttiglia  Mas. A special and secret frogman group.

He was a champion swimmer and had trained as a salvage diver. He was directly involved in the testing of breathing apparatus, which had been specifically developed for this group of frogmen.

He was under the protection and direction of a man called Ernesto Forza. His reward for his work was to be allowed to remain in any forces specific to the defence of Trieste.

In early 1942 dad married a beautiful 16 year old girl called Silvana, with her family’s blessing. Later that year she gave birth to a little boy they named Livio, short for Oliver.

By 1944 my brother, at 16 months of age,  would be dead, a victim of lacking medical resources and subsequently contracting a viral pneumonia, whilst having to endure many days in cold bomb shelters.

I had never seen such pain on a man’s face than when he had to in any way address his tragic loss. His heart was broken, mended only in part by the birth of my sister in 1946 and me, in 1949.

In 1956 he packed up a few possessions, his wife and two children and took us to Australia. Suez was closed due to conflict and of course Russia was annexing Eastern European nations.

He would not lose another child to war, which he was certain was coming. The battle against Communism. So much of what I saw in him was the direct influence of seeing, hearing, and even enduring great injustice. In the then Yugoslavia he saw old women hurling molotov cocktails and hand grenades at Italian and German soldiers occupying their lands. To save himself and his troops, he knew there would come a time when he may have to kill one of these women or even children in self defence. By the grace of God he said, somehow, with blind luck, he would never have to do such a thing. A thing of nightmares!

So what of the Australian troops in Afghanistan? Who can say what, in war, a young man would do to survive. I know quite a lot about this because in 1969 and 1970, three times a week, I was granted permission to talk to US and Australian troops coming to Sydney on R and R. What I heard and saw made me grow up a bit. The intricacies of the changing of young men’s characters before my very eyes was hard for me to fathom, as I too was young and naive.

In spite of the changes in America through the sacrifice of many great people such as Martin Luther King, there was still a huge divide between the black man and the white man in the Vietnam war.

One young black soldier told me of the great numbers of black American soldiers killed in Vietnam by “friendly fire”. Why was it that at every dangerous mission or patrol it was a black soldier who lead from the front.

White officers were sacrificing black soldiers . As time went on, several such white officers had mysteriously been killed in safe areas. He smiled and I knew what he was saying. Fortunately I was not so stupid as to ask why this was happening. Oh my God, these people are nuts, was my reaction. What could I say and what could I prove?

I was soon exposed to some soldiers who had been accused of participation in the My Lai massacre back in 1968. Lt. William Calley took the blame and took the brunt for the killing of 500 unarmed South Vietnamese civilians.

I looked at their faces for outrage, but I saw none. I did see some anger as it was raised. How did his men go along with such a barbaric act, I wondered? Then I remembered my dad walking the streets of Yugoslavia, and how such
an act could have spontaneously erupted. It did not, because my father acted with the wisdom of a man twice his age due to his own life experiences and pain. He was not a religious man but always quoted the same thing when
humanity narrowly avoided great tragedies. ‘Blessed are the peacemakers’ he always said.

White American officers sending black soldiers to their deaths and black soldiers accidentally killing some white officers … that was the stark admission. As I shook my head in disbelief, one looked at me with a piercing look I won’t easily forget. Ahh he said, you think this stuff only applies to Americans. Well !! He said with a raised voice. Your boys had their My Lai…. maybe not with 500 innocents dead, but dead innocents just the same. “Ask them, and stare into their eyes. You’ll see the truth. You will…..you will,” he said.

My father went into one last action in 1944 with 735 young men to slow down the advance of the communists until the allies could arrive and secure the city. 22 days later he slipped into the city to find his son had died.

He then spent almost three years trying to find any of the other 735 men who went to war for a useless cause, as only hours after he re entered Trieste, the Communists marched in and occupied the city.

When we left in 1956, not one of those young men was found, nor their remains. When a historian who was trying to research the event heard that my father had survived and moved to Australia she broke down in front of me. She said this story must be told.

In the last 13 years I’ve lived my own tragedies. I lost my mum, I lost my cousin, a person who was just like a sister to me and having watched injustices all over the world, I truly lost a lot of faith that the truth was still important.

Because we live in a world where winning is all important and distortion of truth is just another casualty. Not long ago I saw a TV show about a white American woman and a black American man who were visiting Australia to tell us what the US justice system had done to them. Both had been in prison for over 20 years for murders they had not committed. The woman had been on death row with three weeks to her execution. Again, evidence which was available 20 years earlier had been ignored and then again at several appeals. The system fought back tooth and nail to maintain the convictions instead of looking for the truth.

The book by Hurricane Carter, a black boxer who went through the same injustice as those two, could be the reference book for all such injustice. And, as the black soldier said to me in so many ways …….. injustice is rife when the main aim of the justice system is to bury its mistakes instead of undoing what can be undone at lightning speed. What can we do to change things?

Earl H. Perkins writes: Rubin “Hurricane” Carter could have become one of the greatest pound-for-pound fighters to ever box, but the system and racial prejudice ruined his life. 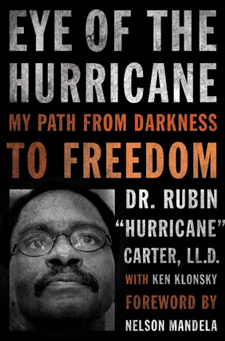 Carter passed away in his sleep at the age of 76, succumbing to prostate cancer, although his entire life was plagued by suffering.

He spent almost two decades in prison for murders he didn’t commit. Carter and John Artis were convicted for a triple murder at a Paterson, New Jersey, tavern in 1966, followed by matching convictions at their retrial in 1976.

Carter was eventually freed in November 1985 after his convictions were set aside following years of appeals and public outcry. The racial motivations and his plight were trumpeted in Bob Dylan’s 1975 song “Hurricane,” along with several books on the subject.