It runs to almost 600 pages and weighs 2kg. There’s no ducking acclaimed geologist Ian Plimer’s latest book of scholarship, Green Murder, ridiculing climate alarmists with scientific facts, calling their alarmism a murder threat. The facts are not new; “read the rocks” he says, the past is the key to the present. It’s a dangerous, heretical book, contradicting the ruling orthodoxy – with scientific evidence.

No question that Ian Plimer is a geologist first and foremost: “The story of the planet earth is a marvellous incomplete chronicle written in stone. We have enough empirical evidence from history, archaeology, glaciology and geology to show that past climate changes have never been driven by trace additions of carbon dioxide into the atmosphere. There is no reason to conclude that present human emissions of carbon dioxide will be any different. The only way to understand climate is to read the rocks because the past is the key to the present.”

Plimer does not suffer fools gladly – especially those he regards as climate fools; and their ranks include common or garden activists, highly placed (lowly informed) politicians, unquestioning, activist journalists and commentators who regurgitate alarmist propaganda. As well as the many compromised scientists.

“Because science is a closed shop, it is far easier for fraud to flourish. Most scientific fraud involves omission and ‘homogenisation’ of data, poor statistical treatment of data, claiming credit for the work of others, ignoring contrary findings and producing pre-ordained conclusions. There is certainty in the mob rule of consensus science, and that keeps the gravy train moving.” 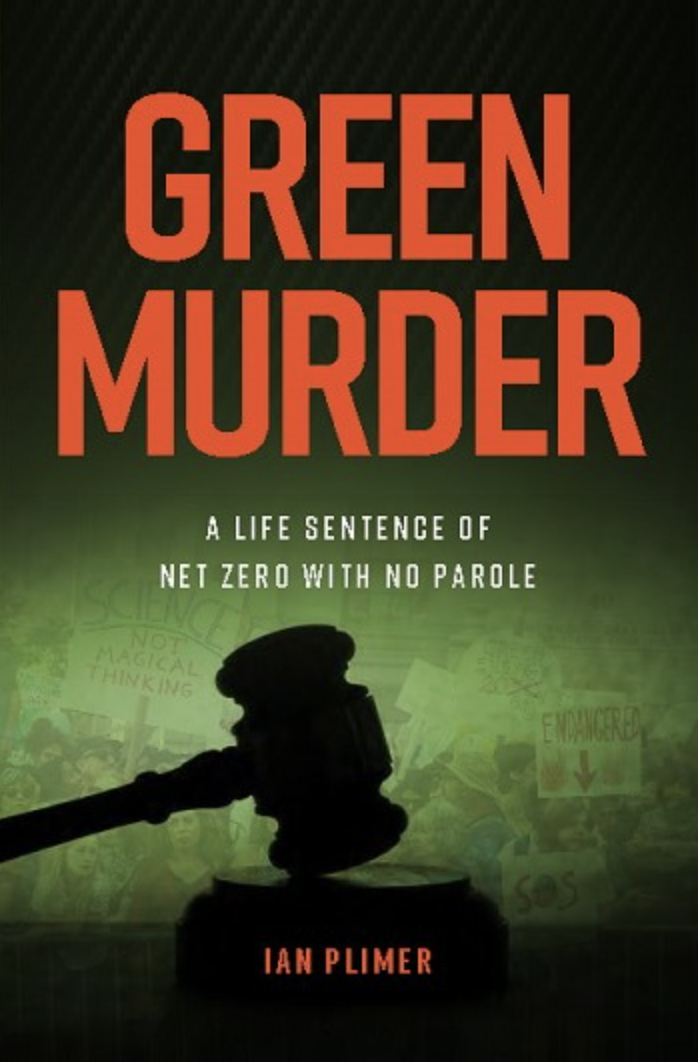 The primary message in the 600 page book is that it has never been shown that carbon dioxide drives global warming. He reaffirms that at various opportunities throughout the book, referring to the mass of evidence on which he relies for all his arguments. (The last 52 pages of the book are taken up by notes, sources, references…) He demolishes the basis of the current climate change orthodoxy, takes the reader through the quagmire of renewables and shows in detail why the whole package is causing great harm, built as it is on a combination of ignorance, misrepresentation, fraud and greed – a veritable witch’s brew falsely labelled ‘science’.

“Most public discussions about climate change are underpinned by emotion, and normally the intensity of emotion is inversely proportional to the amount and veracity of evidence,” he scoffs. “The word ‘belief’ is not used in science because belief is untestable…” In his book Climate Change Delusion and the Great Electricity Ripoff  (Connor Court, 2017), he said ‘do you believe in climate change’ is the “moron’s question”. (Green Murder might be nicknamed ‘The Book of Moron’…?.)

He has (rhetorical) questions of his own: “Why didn’t humans, polar bears, emperor penguins, and other poster animals of the green activists die in the previous warmings when temperature was 5 degrees Celsius warmer than now?”

As for the Great Barrier Reef, “poster child of the green left environmental activists, [it] disappeared during glacial events more than 60 times over the last three million years. Each time the Great Barrier Reef disappeared, it reappeared a little later. It has survived past massive rain and storm events that deposited sediment on the reef well before humans were around.”

In more recent times, he writes, “The Covid 19 crisis caused the biggest fall in global energy investment in history. Consumption of aviation fuel and petrol plummeted with the consequent drop in human carbon dioxide emissions, but with no drop in global temperature.”

We can understand his disdain and ridicule, given the claims by alarmists can easily be debunked, in a few seconds on your smart phone, he notes a couple of times. (They could also read any of his earlier books on the subject.)

He warns that “We may be the first civilization destroyed not by the power of our enemies, but by the ideology and ignorance of our teachers, and the nonsense that they are teaching our children. Young people no longer want to hear the truth, engage in debate or read because they don’t want their cherished illusions destroyed.

He flays the ‘cherished illusions’ of a ruling orthodoxy.

The past is the key to the present in more ways than one: “There was once a consensus about eugenics…. Eugenics research was funded by the Carnegie Foundation and the Rockefeller Foundation, both of whom now fund climate activism. With such eminent citizens and respectable foundations supporting eugenics, how could it not be correct consensus science. The same logic is used for climate science. We now know eugenics was a racist, murderous, anti-immigration social programme masquerading as science.”

The above example appears in one of the more entertaining chapters, The End is Nigh, in which Plimer details dozens and dozens of doomsday predictions over many years – all of which now look absurd, often laughably stupid.

In 1970, Peter Gunter from North Texas University proclaimed a timetable in which “by 1975 widespread famines will begin in India. These will spread by 1990…. by the year 2000 or conceivably sooner, South and Central America will exist under famine conditions. By the year 2030 years from now, the entire world, with the exception of Western Europe, North America and Australia will be in famine.”

It was a bad year for predictions, starting in January 1970 when Life magazine warned that “by 1985 air pollution will have reduced the amount of sunlight reaching the earth by half.” There are plenty more in a similar vein, not least a bunch of Paul Ehrlich’s various ridiculous catastrophisations, which Plimer describes as a ‘death cult blackness’.

In June 1989 the UN Environment Program was quoted saying: “entire nations could be wiped off the face of the earth by rising sea levels if global warming is not reversed by the year 2000.”

The End is Nigh chapter runs from page 157 to 232, filled with similar projections and prophesies none of which were fulfilled. Plimer’s point is that today’s climate alarmism – complete with its doomsday clock ticking in the ears of Ponce Charles, Greta Thunberg and David Attenborough – already seems just as absurd. The chapter bolsters Plimer’s argument that consensus is not science and not reliable.

Nor can we rely on the IPCC, “when it admits that it used a Greenpeace campaigner to write  an ‘impartial’ report on green energy suggesting that 77% of the world’s energy in 2050 could come from sea breezes and sunbeams.”

The Guardian’s political activist writer George Monbiot (Plimer refers to him as Moonbat) predicted in 2002 that there would be famine in 10 years. “There wasn’t. Moonbat also claimed that ‘Famine can only be avoided if the rich give up meat, fish and dairy…’

There is much, much, much more to this book, confronting with proven science every conceivable aspect of climate change subjects, from renewables, fires, droughts, energy, ‘freakonomics’, and a chapter he calls ‘Fads, Fashions, Fools, Frauds and Finances’.

Plimer closes his book with ‘certa bonum certamen’ a chapter urging us all to ‘fight the good fight’ (St Paul’s College motto).

And there is the past with its promise to the future: “For hundred of thousands of years, humans and other organisms have adapted and flourished to great and rapid natural climate changes. Surely adaptation by an advanced technological society would be easier.”

Plimer dedicates the book to Dr Gina Rinehart “the most remarkable woman Australia has ever produced and, despite being generous, highly intelligent, astute, charming and caring for her country, she gets constantly pilloried by the envious green left who have yet to make a contribution to the nation.”