There is a dog-leg shaped room in the accommodation wing of the Kremlin where Vladimir Putin retires to watch tv. The main room has a lounge and several armchairs, the big tv screen on the wall, and chairs scattered around the walls to be used as required. In the smaller leg, there is a walk-in bar, three armchairs, a stool next to the bar and a smaller tv screen.

Whenever Putin is around between 5pm Moscow time (10am New York) and lights out, he sweeps into the room with his loyal team for some comic relief. He watches American cable networks. Exclusively. All evening and half the night. And he laughs so much that his stomach muscles have firmed. 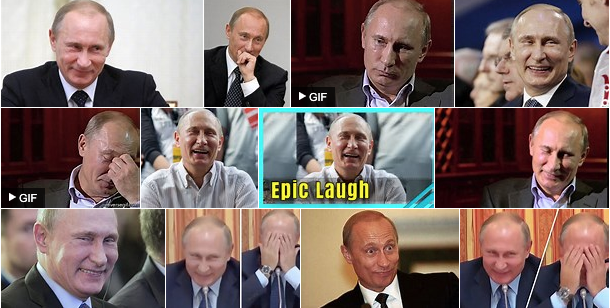 Putin watching US Democrats on tv in their impotent fury

Usually in a small crowd of half dozen trusted aides, Vladimir watches and snorts with disbelief as the Americans flay each other in language seemingly lifted from old Stalinist texts. See below*.

Putin smiles his venomous best when the Democrats denounce Donald Trump as a ‘Putin puppet’ and everything else on the wrong side of bad. And at impeachment demands, Putin doubles over with laughter. Putin often repeats to his friends that the best few hundred thousand dollars Moscow spent was on paying agents to fiddle with social media during the campaign. The ongoing results are beyond the wildest fantasies of his team. “They eat themselves,” Putin says every day in front of the tv.

They laugh hardest at Schiff and Pelosi and Swalwell as they denounce Trump, but they double up when Maxine Waters pops up with her maximum deranged pronouncements and her demands for impeachment, with the fury of the impotent.

Putin can’t believe that the American Democrats are creating more chaos, fear and  loathing in their own political system far more effectively than he himself ever could.

A Bill of Rights that establishes once and for all that every American, regardless of his or her income in entitled to:

These six “rights,” which define Sanders’ platform, are indistinguishable from the rights identified in the 1936 Soviet Constitution, which is also known as the Stalin Constitution.